Why Centrolls Are the Best Value Satellites in Online Poker

1 year ago ● the My partypoker LIVE community

I’m a recent convert to partypoker precisely because of the satellites. Satellites are by far my favourite format and not only does party have the broadest selection of live events, I also really like the ‘token’ system that means you can choose the event you use your token for a lot of the time, rather than being forced to play a specific event.

Having said that, the best value satellites on the site, and possibly in online poker, right now are the Centroll satellites to the live events like partypoker LIVE, the UKPC, DTD200 and the Irish Open. They may force you to play a specific event but they are really worth that limitation.

Centrolls are events that cost a small amount to buy in but subsequent rebuys cost more. They also include add-ons at the end of the rebuy period which gives you a number of chips that is significantly higher than the original starting stack. Most of the Centroll Satellites to live events are $0.50 to enter and you get 2,000 chips, and you win a $22 satellite ticket at the end of it. If you bust out you can re-enter for $2 for another 2,000 chips. At the end of the re-entry period, you can add-on 10,000 chips for another $2. Those 10,000 chips tend to be significantly higher than the average stack at the time and often would take most players way above the chip leader if he or she did not also add-on. So even if you have played really well and chipped up, you would be at a massive disadvantage if you did not add-on. So despite the initial buy-in being $0.50, many regulars will end up spending $2.50 or $4.50.

Starting at a lower buy-in amount is obviously a ‘foot-in-the-door’ technique to get you to buy in again for the larger amount if you bust, let’s not kid ourselves otherwise. This does mean they are great value if you approach them correctly. The appeal of Centrolls is that they include a lot of micro stakes players who would not otherwise have bought in for $2.50 or $4.50 but were happy to have a punt at $0.50. So this means that the field is even softer than a standard satellite around the $4.50 level.

Many players who are taking a punt at the initial buy-in will not bother to add-on for the additional, larger, top-up. This means that at the end of the rebuy period those who do will have much greater odds of cashing and the players who do not will be struggling to survive much sooner. Topping up at the end of the rebuy period when others do not is an easy way of essentially buying an average stack near the bubble.

The best reason, however, to play them is because the overlays so far have been ridiculous. Most of them award five or ten $22 tickets to the next satellite stage, but the Centrolls themselves only attract about 20-30 players, many of whom don’t even add-on. Last week I played a Centroll for the UKPC and didn’t even play a hand. Seven people entered, five tickets were guaranteed, and before anybody could late register, two people were eliminated early and I had won my ticket in minutes.

I think the trick to Centrolls is to treat them like a $4.50 satellite, always add-on and play the usual tight-aggressive strategy. That way, you can be pleasantly surprised if you only have to add-on and not rebuy, as well as if the satellite has a big overlay and half the field don’t add-on when they probably should. 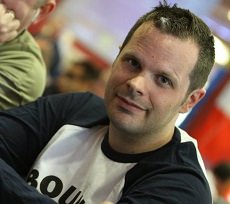 Barry Carter is from the United Kingdom and has been working in the poker industry for 12 years. He is the editor of pokerstrategy.com, the co-author of The Mental Game of Poker 1 & 2 and he blogs about the poker industry at pokermediapro.com. He also has the dubious distinction of being the first player ever to bust out of a tournament at Dusk Till Dawn.