Take Me to the Beach

OK, so I’ve linked my partypoker LIVE account to that of my real money partypoker account like Mike Sexton, Chairman of partypoker told me to. I refresh my webpage at My partypoker LIVE and it’s confirmed that my accounts are linked. Well, if the promotion is to be believed, then I should have my two free $11 tournament tickets to the Caribbean Poker Party satellite qualifier.

True enough, a short while later, there they are in the top-right corner of the new dark-themed partypoker lobby (looking smooth, design team). Two ticket-shaped avatars, but to me, two shots at glory. Two $11 tickets into a qualifier to reach the semi-final. If I can get there, well, I might as well invest in sun lotion shares. I’ll be on the Baha Mar beach for the 2018 Caribbean Poker Party before you can say ‘hammock happy hour’.

There's a satellite qualifier that’s in late registration into Level 11. With 4-minute levels, I estimate that I can be in that semi-final in literally 52 minutes. That’s the lunch break sorted, then! I sit down and look to get in amongst the action straight away. It’s a 6-Max format, this satellite, which is a format I love. You’re involved in more pots six-handed (or at least, you should be) and there’s every chance of getting in during late registration and immediately rocketing up the leaderboard.

During the second hand I’m dealt, I’m trying to do exactly that. There’s an active player with plenty of chips who is splashing about like they’re already on the Atlantic Ocean and at a partypoker LIVE beach party. This player is involved in every pot and we’ve got

in late position. We raise it up and get a call from Captain Splashypants, who we reckon wears those rainbow-coloured surf shack shorts that were cool in 1991. We haven’t worn them in at least 18 months.

To a flop we go, and a king-high spread with two magic clubs. He calls my c-bet and on the turn, an eight lands. Scare tactics, then. We virtually shove it all-in, and he calls with

. OK, we’re behind, but the river could yet bring a… ah, a heart. Plan A was flawed. Captain Splashypants is stuffing his beach shorts with our opening stack.

But this is why Mike Sexton isn’t just Chairman of partypoker, he’s my new best friend. He’s given me two tickets, not just one. I can still register a second entry in this very tournament and get revenge. As anyone who’s ever played a first-person shooter at 4.00am will tell you, just like morning coffee, it’s the second shot that’s the most powerful. 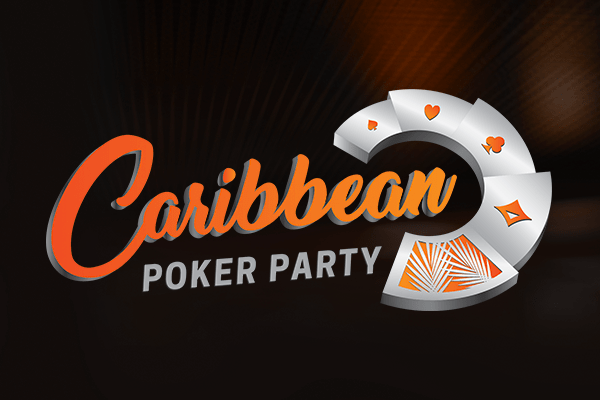 We’re back in, and at a different table. No-one here knows that I like to risk it all on second pair and a flush draw. They might do in an orbits time, but I have to wait for the dealer button to pass me. Hey, I can’t lose any chips if I’m not in the hand. Money saved is money earned, people.

Back on the horse. I get involved once again, raking in the blinds with pocket sixes, folding to a c-bet with Queen-Jack (damn those pretty royals) and I’m at starting stack a dozen hands into my second free ticket. This is costing me nothing, but it’s a right laugh. To say the table is active is a bit like saying Katie Price likes getting married. There’s more action than in a movie starring Bruce Willis, Jason Statham and Arnold Schwarzenegger. I call a raise in late position with

and flop an open-ended straight draw with a queen and ten on show. I’m looking for one card to complete a straight, but two cards can come that would help me. The turn brings a king, so I raise for value and get called. Another chunky bet on the river gets another call. I drag the pot.

I’ve doubled my stack and I’ve been playing for 14 minutes, including the time it took me to check the package details. Apparently, when (OK, if) I win a package, I’ll receive a $5,300 entry, $2,000 towards my flights to the Bahamas – last time I checked, they weren’t even half of that amount – and nine nights bed and breakfast for two people in the Baha Mar resort. As if that wasn’t enough, I’ll even get $1,000 in Baha Mar ‘resort credit’, which I can spend on food and drink, activities and all manner of facilities. Even drinks from the bar and watersports in the deep blue ocean? Oh, this is too good.

A few hands later, I’m a little short. Maybe it was daydreaming of white sand and blue skies. But a three-bet and I’m all-in with 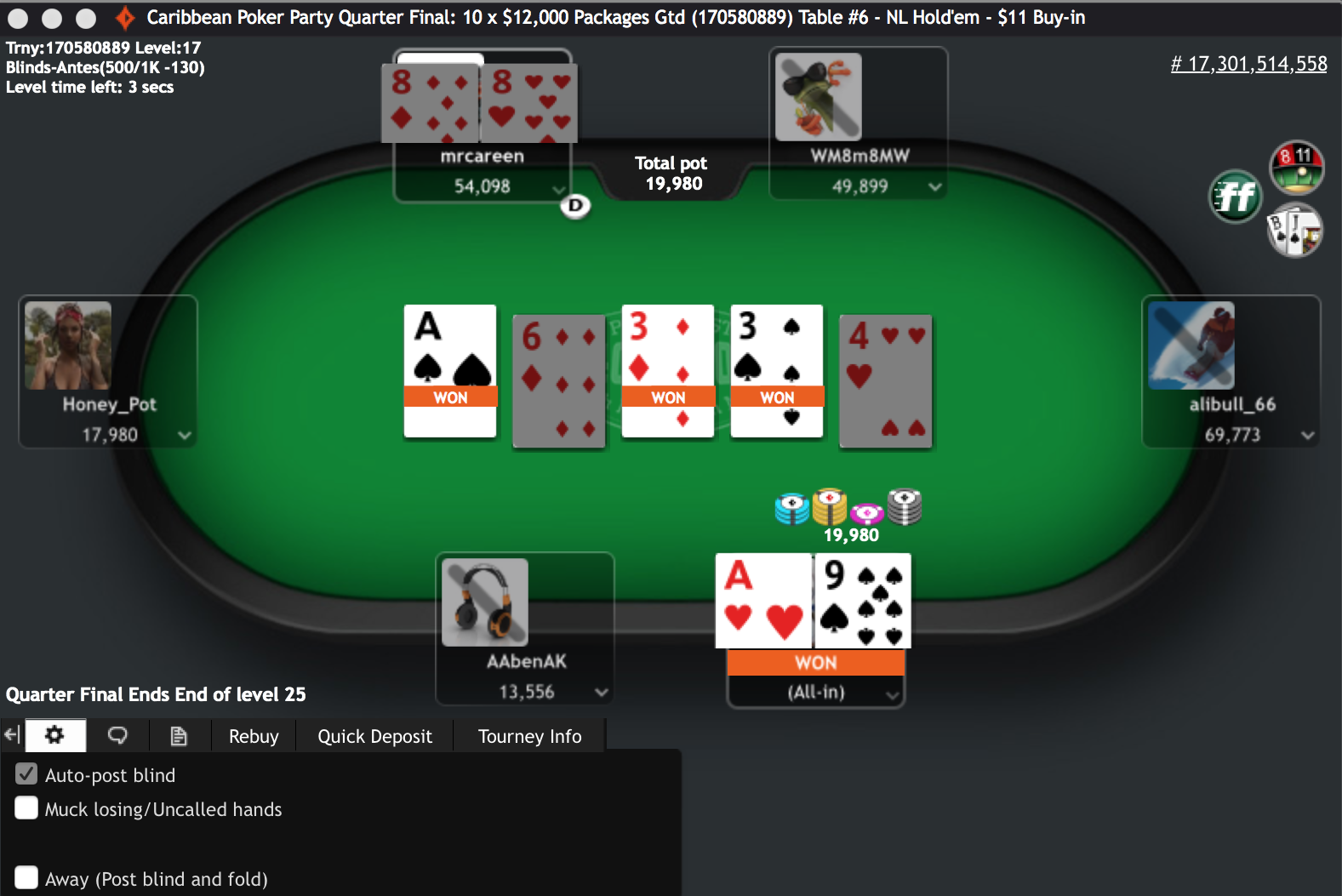 I manage to double up against one of the table’s chip leaders. Now I can basically start packing khaki shorts, sunglasses – dual purpose in the Bahamas, with blazing sunshine and a face born for giving away poker tells – and practice how I’m going to lift the MILLIONS Main Event trophy with a million dollar win on my Hendon Mob page.

There are a dozen players left with six levels to go. It’s been fast, but never furious, it’s a very friendly table. Maybe everyone here is using their free tickets. Two more players go all-in and drop out on other tables and suddenly we’re down to the final ten entries from the 54 players who took part in this satellite qualifier. The only problem is that I’m ninth in chips.

The advantage of 6-Max here is that I’m not at a ‘final’ table yet, as there are still more than six players. We’re fairly short-handed , though, with just four players at my table. I’m the short-stack they all want to leave the party. But this is partypoker and I’m going to be left dancing. I’ve got three levels to navigate and I’m in the semi-final.

I manage to hit a dream situation on another flop. What do you do in this position? 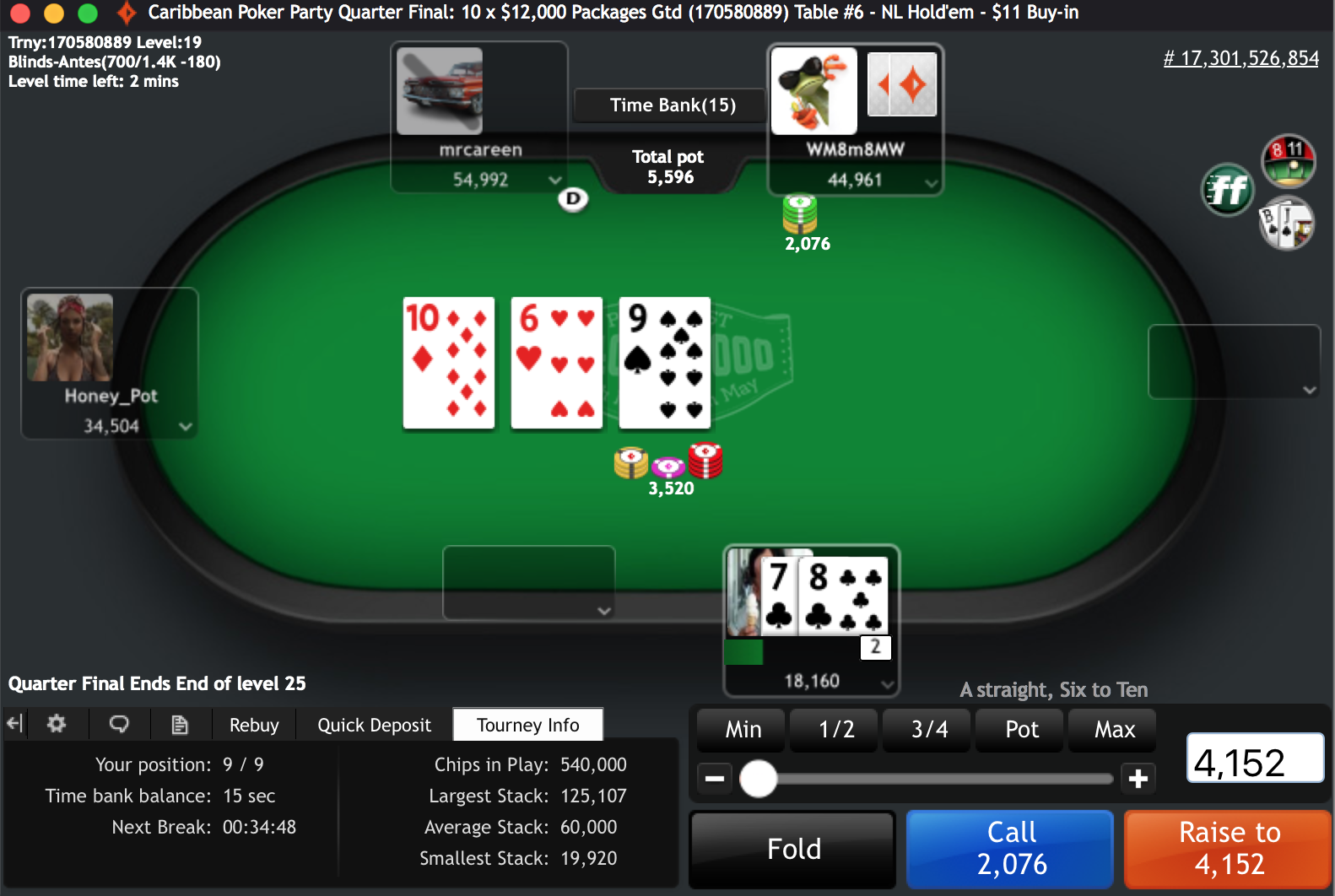 I decided to scare him off and fail to win any more of WM8m8MW’s chips.

When there are eight players left, I’m eighth in chips with eight big blinds. I shove with

and get it through. Another player departs and it’s the Ready Money Round, except I can’t buy a drink for anyone.

gets through, Pocket nines? I go all-in again. Please call!

. I’m obviously all-in and this time I get a call. Oh, no. My opponent has pocket jacks. But then the dream flop comes: 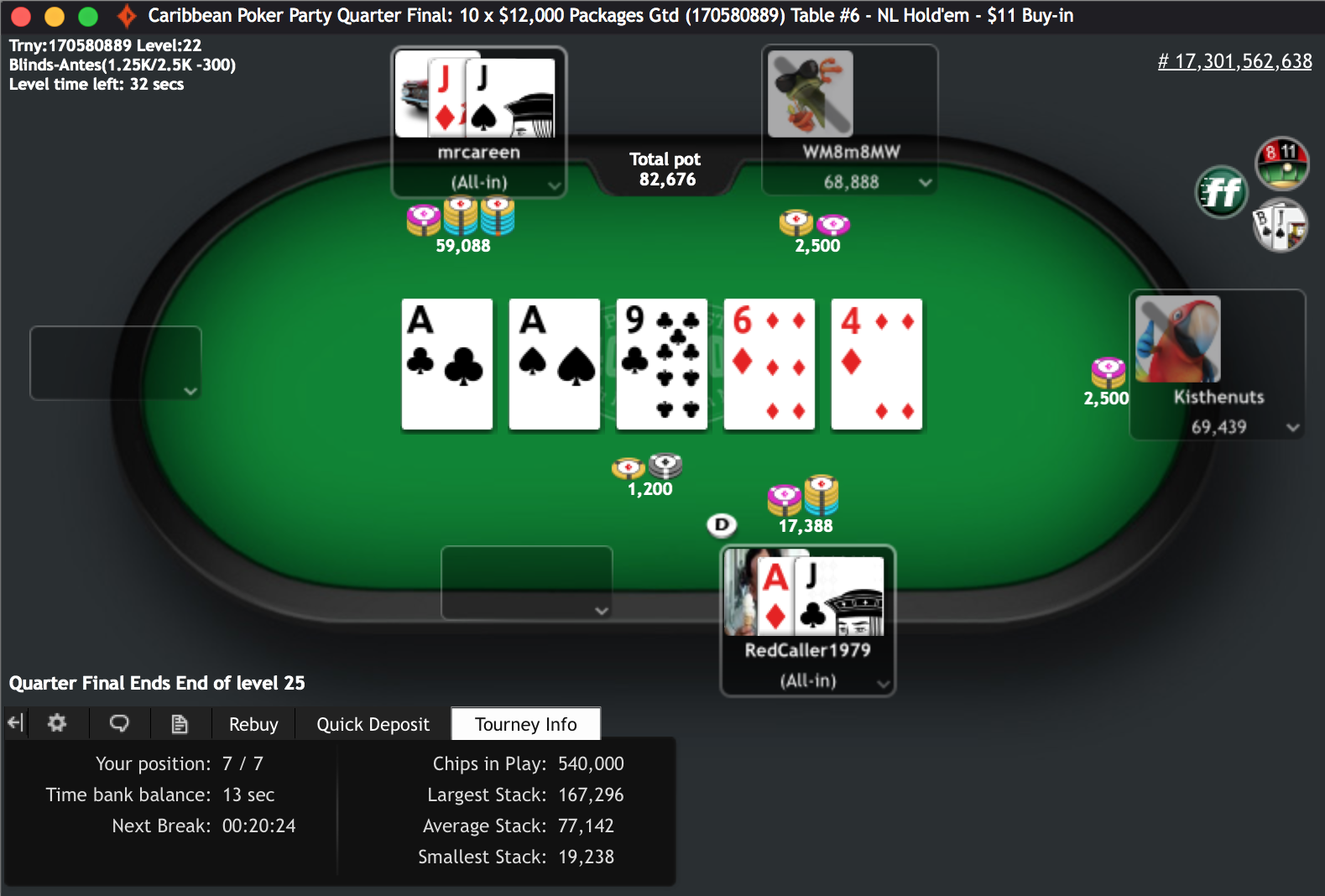 We’re down to the final table. I’m sixth in chips despite my heroics. Maybe I should wait for pocket sixes. I have a third of the average stack, however. Chip leader jonno141 is lording it over the table with over 217,000 chips. Seva331 has 103,000 fun-discs and now Kisthenuts has doubled through the leader with pocket queens.

This is, as Bobby Darin once sang, my moment. Actually, was that Martine McCutcheon? Nope, I was right, Bobby Darin.

‘A man knows a moment

When fate takes his hand

And this is my moment…’

And it surely is. I've got

on the button and I'm all-in. The double-up is going to be mine with less than two four-minute levels left. I'll put on a song by Elbow and slow it right down. But wait. The player known as jonno141 has called with

Here comes the flop. No luck. 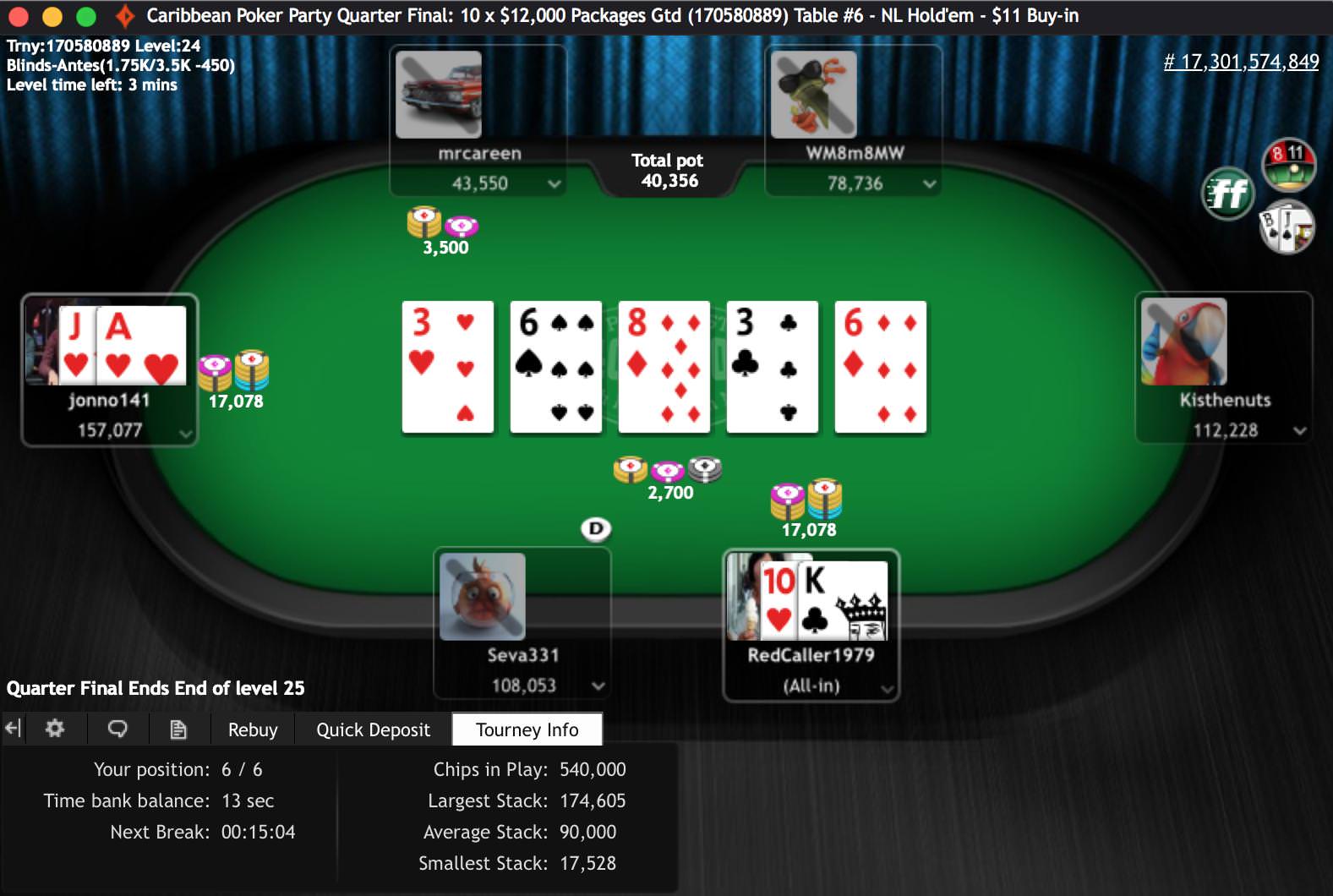 Well, mrcareen or WM8m8MW are both looking good for a seat, maybe they’ll be looking for someone to hold their bags. My dream is over.

A quick check online and it transpires that satellite qualifiers are running from $0.25 right through until shortly before the Caribbean Poker Party in November. That's six months away.

I’ll get there, I know I will… unless you can stop me! 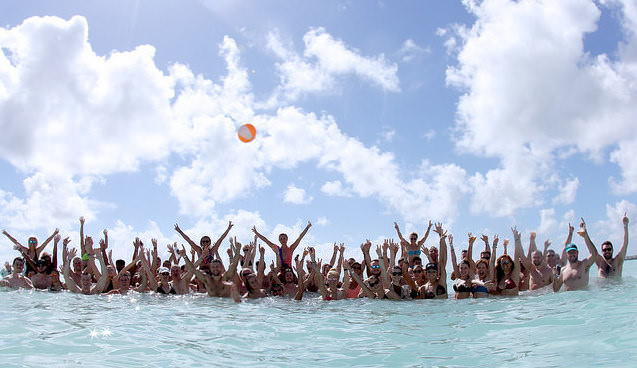