When you enter the world-famous Trickett’s Room at Nottingham’s Dusk Till Dawn casino you know that, aside from the VIP treatment, lush surroundings and friendly atmosphere, you’ll be guaranteed high stakes action. There’s no-one who loves that action more than Britain’s most successful tournament player, Sam Trickett. As of this Wednesday, you can join him in Trickett’s Room without even leaving your own home – by going online at partypoker for the relaunch of Trickett’s own cash game. We caught up with the British poker legend to find out how it’s going to happen.

‘We’re going to do it every Wednesday; we plan to run a $100/$200 game. We did it in the past and we’re going to learn from our mistakes. Everything that worked well we will redo and whatever didn’t work well we’ll introduce changes to improve. It’s been a huge amount of work, but I’m really proud of what we’re going to be offering.’

You don’t have to pull up a minimum buy-in to get involved, however. In fact, there’s so much on offer for the fans viewing Trickett’s cash game on the partypoker TV Twitch channel that your favourite armchair might be the best value seat in the house.

‘We’ll have a 6-max game running and try to freshen the line-up each week. We’re going to have a consistent start and finish time, as well as live commentary each week. There’ll be a mixture of players and, of course, I’ll be there every week. It had so much positive feedback last time. High-stakes players I have been playing with for years approached and told me “I’ve not railed online for years and I was watching.” They had fun tuning in.’

Sam Trickett in familiar pose, under the lights and at the heart of the action

Trickett is known for winning tournaments such as the Partouche Poker Tour Main Event for a cool €1 million and the Aussie Millions $250,000 Challenge for $2 million. He even banked $10 million for finishing second in the now legendary Big One for One Drop in 2012. But Trickett is a lover of cash game poker and can remember the very first time he bought in for a big amount online. It didn’t quite go to plan.

‘It was back when Full Tilt was around. There was a PLO game with people like Gus Hansen and Patrik Antonius and Phil Galfond playing. I’d never played much PLO, but I’d always wanted to learn. It was early in my poker career and I had no experience and made bad decisions. I dived into the $200/$400 $16,000 CAP game. I’d won the $1k Monday for around $80,000 and had loads of money in my account. I saw this big game and this ‘Chufty’ guy from England in the lobby, who’d won millions from the U.K. and my eyes lit up. I got stacked in the very first hand I played by Gus Hansen. I had a bad wrap and put all my money in when I should have just called the flop. I completely cannonballed it, I didn’t really play PLO that well at all, so to dive in at that level was so stupid. I remember being super-nervous…but it only lasted one hand! I had one rebuy, got even and just quit because I was scared. It’s not most people’s first high stakes experience.’ 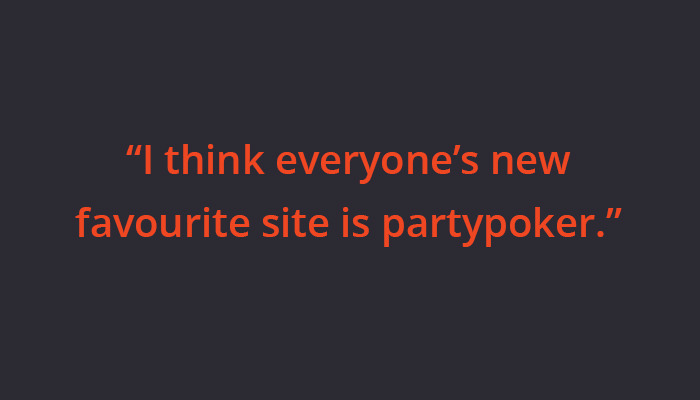 Trickett’s first experience of a massive pot against big-name professional cash game players may not have been the baptism he hoped for, but he loves the fact that many of the players he first duked it out with are coming back to the felt. There’s a number of reasons those players will be interested in joining Trickett at the virtual felt, but the first one is word of mouth.

‘I think everyone’s new favourite site is partypoker. Recent events with other poker sites have sent a lot of players out to play our live tours, and that’s good for the game. We need to get more high-stakes players online. I was playing just a minute ago and some great players who I’ve not seen play for years are coming back to play on partypoker. It’s brought back a few of the old faces.’ 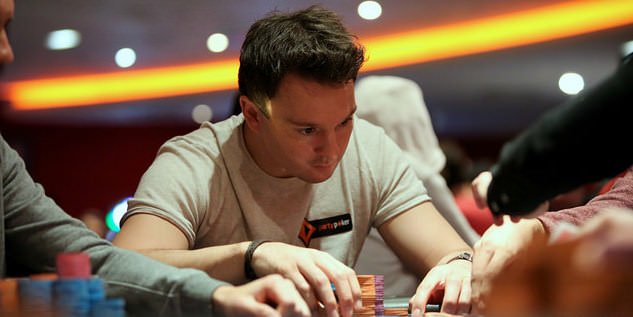 Many poker players look to retire or at least leave the game when they’ve attained certain life goals. It’s not happened yet for Sam, though that hasn’t stopped him investing in a few old friends who took time out to develop other passions. OK…more than a few.

‘Some players retire and want to something else, then they realise that it takes work, a lot of hard work, to be good at anything. If you suck at something, then they think ‘Well I’m good at this thing where I don’t have to do so much work.’ They then return to poker. I have invested in a lot of poker players who try to be entrepreneurs… it’s not gone well!  I should probably invest in people who have experience in things, not start-ups, but you want to do someone a favour, give them a chance to do something different.’ 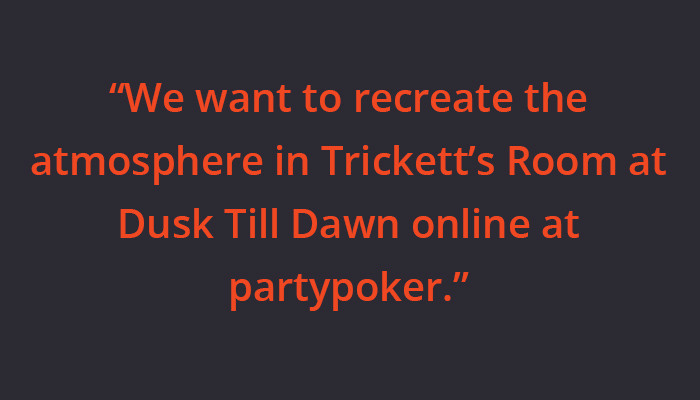 The social nature of a cash game suits Trickett, someone who is as chatty away from the felt as any other professional out there. But as he told us, that desire he has to enjoy life and help others do the same has never been limited to time away from the felt.

‘I love cash games; there’s no structure, you don’t have to be at a certain place at a certain time for three or four days of poker for a game that might only be worth it if you win the tournament. I played cash games from the start and it’s where I feel comfortable. I can talk a lot more. In a tournament, I don’t know the people, but I tend to know everyone in a cash game. So it’s more of a social game. It’s a relaxed game and both I and the other players loosen up. I really enjoy it. We want to recreate the atmosphere in Trickett’s Room at Dusk Till Dawn online at partypoker.’

After the recent events on the partypoker LIVE tour, fans probably need no reminding of the excitement they can witness. After all, the MILLIONS Germany Main Event was won by the most incredible call to win a major tournament in recent history. Viktor Blom provided the magic moment of course, but the commentary from poker legends Simon Trumper and James Dempsey was just as much a part of it to millions of poker fans worldwide. Dempsey will be back on the mic for Wednesday’s game.

‘James Dempsey will be the commentator with another commentator next to him. We are going to run promotions for viewers during the stream, so it’ll really get fans involved. The MILLIONS Germany Main Event heads-up was amazing. Trumper was electric after the hand.’ 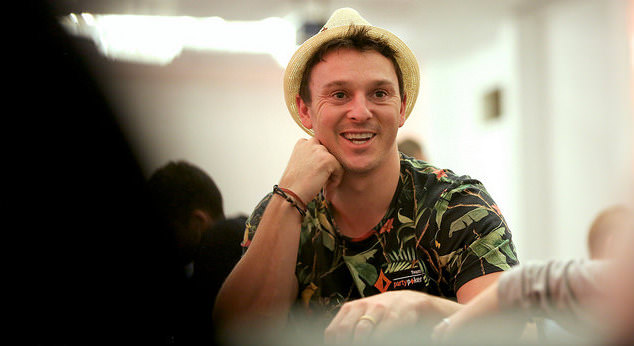 Ever the social animal, Trickett pictured here at the 2017 Caribbean Poker Party 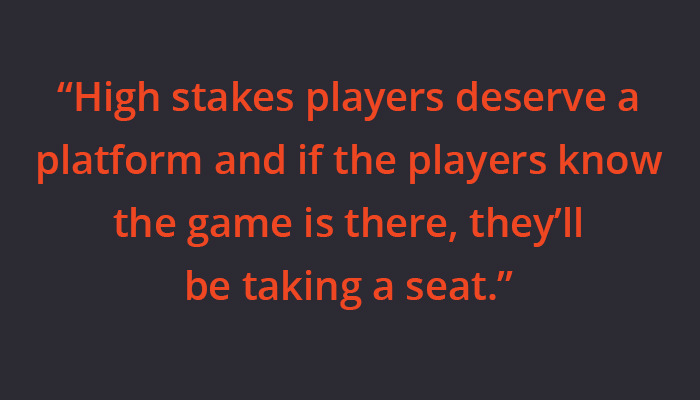 Bringing back high-stakes to partypoker online clearly excites Trickett, and as he says, partypoker have a wider responsibility to make poker fun again. There are ways high-stakes could be improved across online poker.

‘We want to introduce new rules to make a fairer game, to make poker fun again. We’re going to run organised games like we are now. Hopefully, we’ll have games running twice a week and if people want to play privately, they can use our platform to run their own games. There have never really been organised cash games online. Big game players deserve a platform, and if the players know the game is there, they’ll be taking a seat. I believe they’re seeing partypoker bring competition back to the industry, which is always good for the top pros. If there are better games on partypoker, they want to dip their toes in the water and see what’s going on.’

We can’t wait to splash about on the Twitch stream this coming Wednesday. If you like fast action and excitement on every flop, you won’t want to miss any of the action yourself.