Patrick Leonard has always been a player who looks at the bigger picture. It’s never just about one game. It’s about how the game itself can be improved, fellow players can be improved – he is head of BitB Staking – and how he himself can improve, both as a player and a person. So when Leonard joined partypoker a couple of years ago, he did so to improve. It turns out that his involvement has helped partypoker evolve too, thanks in no small part to the sheer work Leonard himself puts into every project.

‘I speak to management every day about not just our offerings but our ideologies behind things. PKOs have been a big part of our discussions over the last two years. At first, it was ‘wow these are strangely impressive’ to ‘wow the industry has them completely wrong’. Not only the rake, but the fact that most start 200bb deep, play is nine-handed and have hours and hours of late registration is very counter-intuitive for what the game actually is. In my opinion, PKOs should be six-handed, start 50bb deep, have 30 mins of late reg and low rake.’

Many players who read Patrick Leonard’s recent forum post on 2+2 found themselves agreeing with him. But many of those players knew the industry, understood rake and every nuance of it, they were regulars. What was crucial to Leonard and partypoker was appealing to the more recreational player, a new player to Progressive Knockout tournaments, and making their experience an enjoyable one. A new player might not sit down to register late at the virtual felt and understand why having 50 big blinds and paying the same rake as someone who kicked off the tournament with 200 big blinds is any different.

‘I run the biggest professional poker ‘backing’ group and our guys are only allowed to register for the first 30 minutes of the tournament so when I see recreational friends of mine from university registering three hours in and paying the full rake amount it's often really frustrating for me. Historically, registering a tournament at any stage before the money is fine for the player. Take a World Series of Poker. It doesn't matter if you register on Day 2, the $50 million prizepool (5,000 people paying $10,000) is still $50m since no money has been taken out, even though 30% of the field has gone. Let's say the tournament was PKO instead – which will happen one day probably by the way things are going! Whenever somebody gets knocked out, money is directly taken from the prizepool. Let's say John Duthie registers on Day 1. He is playing for that full $50m prizepool. But when you register on Day 2, you are playing for a diluted prizepool, it isn't fair to pay the same rake. 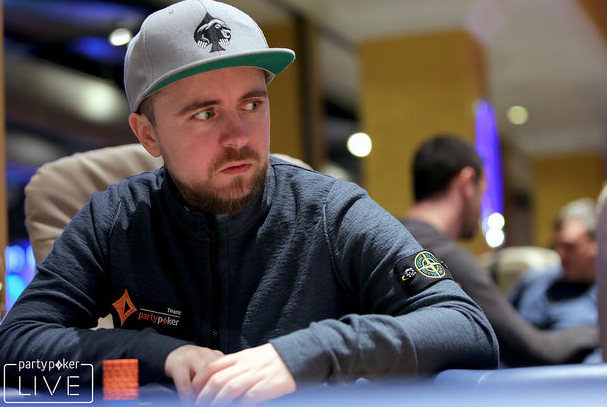 ‘Additionally, when John registers the tournament he has the same stack as everybody else (the average stack) when you register late and 30-50% of the people are knocked out your stack is going to be significantly lower than average and the people on your table will likely all have more chips than you. This is a big problem as the focus of the tournament is to knock people out and get their bounties. Because you have less chips than everybody you don't even have a chance of getting any bounty unless you get really lucky. This is the reason why it isn't profitable to register the tournament once the average stack increases.’

Fair is a word that keeps coming up with partypoker. There is a definite sense that while partypoker are ambitious and want to grow, it’s only a worth growing if it’s been done the right way. That means being fair to new players, regular players and super high rollers alike. That’s historical, too. Poker should be a level playing field. Yes, the most skillful poker player will win in time, but no single player should ever be at a disadvantage in any one game. That’s how it was on the riverboats in Mississippi. That’s how it’s been at the World Series of Poker Main Event. And that’s how it must be, seemingly, with partypoker. It’s a reason that Patrick Leonard decided that he could sign up to represent the poker brand.

‘There are a lot of pros who are happy to just take pictures and wear a patch but, unfortunately, I'm not good looking enough for that. I've been in the poker community for 11 years now and transitioned from a poker ecologist [an expert on poker hired by poker rooms as a consultant] to becoming a professional high stakes poker player. Being able to combine both and use my prior experience to help my peers and almost be the spokesperson for the players’ ‘union’ gives me a lot of satisfaction. If I didn't think partypoker listened or cared, then I definitely wouldn’t hang around. I came to the site two years ago to be impactful and make changes rather than be a globetrotter and I'm really happy that partypoker are as open as they are to positive change.’

That ethic of wanting to be a positive change is one that is echoed from partypoker themselves. And here is where we can really get on board. The PKO rake reduction begins very soon and will take place for six months, with a view to becoming a full and permanent change. A positive change.

‘It's a very expensive change for partypoker, so for it to make long-term sense it's essential there is support from the players. The guarantees on the site are really big and the games are very good. The satellite system is incredibly good meaning the ecology of the games is strong. Players have a choice now. Pay x% of rake and get N% of rakeback at one site or pay Y% of rake and get up to 40% of rakeback at partypoker. There is a huge Powerfest series coming up where the rake changes will come into effect for the first time. You can play $1.10 to $10,000-entry PKOs during this time. I hope this is the start of the ‘PKO boom’!’

It could well be. PKOs have mushroomed in popularity in recent times. For those of you who haven’t taken part, you might want to know what makes playing a Progressive Knockout format so exciting.

‘Often in tournaments, you have to play 3-7 hours to get anything back. If you play the WSOP Main Event you have to play for four days before you even get a dollar back. In PKO, you can make money in the very first hand. Historically, amateurs didn't like playing vs pros as they would just play tight and the early stages of tournaments were very boring and slow. Now pros have to play looser, everybody is gambling more and in general, it feels like more of a level playing field. It also allows you to play slightly higher stakes as the variance is considerably lower meaning bankroll management is more aggressive. The latter stages of the tournament are really exciting. You can get massive bounties for knocking people out. Personally, I think any amateur player’s most natural and obvious weakness is ICM and maybe playing a little too loose in the latter stages. With PKOs you are encouraged to gamble. Again, this is one of the reasons why 200 big blind nine-handed PKOs with huge clocks just don’t make sense to me. How can you get a bounty when you're both so deep unless you both have aces and one of you hits a flush?!’

Maybe Patrick Leonard doesn’t understand that my favourite hand is the snowmen and sometimes I just feel like they’re going to get there. What does he know? Oh, sure, he’s reached #1 in the worldwide Online Poker Rankings on Pocket Fives. But what about his live earnings? Let’s see if he still knows his… OK, yes he does, he has earned $2.2 million in tournament winnings. He’s incredibly successful. So, what is next, not just for him, but the poker industry. What’s around the corner?

‘People speak about poker declining and being less popular, but if we had one open pool where the whole world could play together the tournaments would just be absolutely huge. I think the major problem is governments segregating player pools. It's really sad what happened in America and then more recently in Europe. The future of poker hinges on this and the boom or lack of boom in Asia, especially India and China. I think it's important for poker sites not just to try and attract professionals and beginners, but to go for that target audience in-between. I know literally hundreds if not thousands of people who played poker somewhat seriously and don't anymore. People who played two nights a week in a casino or had a popular format of online poker they enjoyed. 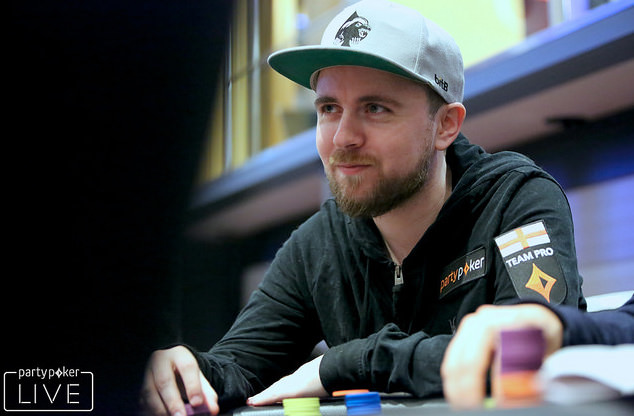 ‘Beginners attracted via TV adverts generally either go broke really quickly or just end up going to casino [games] and/or sports. These semi-serious players are used to playing a lot, used to playing good volume and used to depositing. I was one of those players for years. It's important for sites to get the trust of these players back and make their site the place these players trust and call ‘home’. If I go to a casino in Newcastle tonight, I want all the players to be there playing in their iPads and telling other recreational players how partypoker is the best site to play on. Or for somebody to win a mega feeder, then a satellite, then a tournament and tell all his family and friends on social media. People think that professionals are the ones who can motivate recreational players to deposit and join a site but the truth is that recreational players’ biggest inspiration to deposit is actually often other recreational players.’

The fact that partypoker LIVE has been in existence a year and already has a huge tournament globetrotting following is one thing. But where would Leonard like to see the site he represents develop?

‘I guess there are two parts of partypoker now, partypoker LIVE and partypoker online. partypoker LIVE is already seen as a very strong product and by the end of next season I expect and would like it to be seen as the clear number one live poker tour in the world. It's a really young tour, it really hasn't been around for long. Improving and tweaking some small details for next season will make it huge. They seem to be making new millionaires every week!’

If the MILLIONS Grand Final in Barcelona is a good gauge of current growth, the most ambitious guarantee yet of €23,000,000 across nine tournaments was on offer. Instead, Barcelona had a total prize-pool of €29,700,000!

‘Online, it's important to continue to take market share but most importantly it's to be the company that makes industry standard changes. People might not know this but years ago partypoker didn't take bounties. Other sites all started doing it and then, because it was industry standard, we did too. Now we're the ones making the moves and most importantly making them ethically for what makes sense for players. I know of two or three other big things coming in the near future that will be more proof of partypoker being the ones setting the standards. If we continue to do this whilst improving the whole product such as software and support, then there's no reason why we can't be the biggest poker site in the world.’

On that note, Leonard is gone. No 'pat' on his own back, because that next stage is underway. The next improvement or tweak is always on his mind. Maybe that’s how you become number one in the world – by living your professional life by one watchword, and not stopping for fear of being overtaken. He may go by Pleno, pads, or Patrick, but actually, progress is Patrick Leonard’s middle name.