Team partypoker pro Dzmitry Urbanovich has kicked off his MILLIONS Russia festival in phenomenal fashion, finishing 2nd in the ₽66,000 Open event for ₽6,564,000. Urbanovich outlasted all but one of the massive 1,000-player field, one that saw the event meet the generous ₽60,000,000 (£705,000) guarantee.

Since signing with partypoker in April 2017, this marks the third time the Polish pro has found himself heads-up in a live tournament – and the third time he’s missed out on the win! Urbanovich bought in right at the end of late registration on the first of five Day 1s and proceeded to graft through four days of live poker before ending up heads-up with the eventual winner Valerii Avanesian.

It took just six hands of heads-up play, for Urbanovich to find himself all-in and at risk as a big favourite, but a brutal river card crushed his dreams of lifting the MILLIONS Open trophy.

Urbanovich talked to the My partypoker LIVE reporting team after the event was over.

“I feel great, and I’m happy with the result,” he told us, with a level of authenticity you might not expect from someone who just had almost-certain victory ruthlessly snatched away from them.

“It was a long tournament, so in the end I felt a bit tired but that’s normal for a tournament like this; it didn’t affect my game too much.”

We asked him whether it was a conscious decision to buy in to the tournament so late. “I registered in the very last minute, but this was not the original plan. I took some extra time to rest, so I had to actually run here to make it on time. From the moment I registered, everything was working very well for me.”

During Day 2, Urbanovich was multi-tabling in a somewhat unusual fashion. He was crushing the Open with one hand, while studying the changes partypoker have made to their Sunday tournaments with the other. You can find Urbanovich’s summary of the new MTT structure on partypoker on his Facebook, here.

He also took a moment to give us his thoughts on the new shot-clock system being implemented in all partypoker LIVE events where, from the bubble onwards, players’ decisions are limited to 30 seconds.

“I really like the time bank system. I think, ideally, we would have it from the start of the tournament, but that might cost a bit more because of having one on every table. It is a very good system, and nobody took too much time, especially after the bubble. Everyone started to think more quickly, and it made the game better.”

The long journey throughout the tournament began on Day 1A – the first of five Day 1s – buying in right at the end of late registration. He and the other 205 entrants that took part in Day 1A started with 1,000,000 in chips, with just 12 levels of live poker standing between them and Day 2 of this four-day event.

The partypoker pro certainly didn’t get off to a bad start, making ground almost instantly. He told us about the first hand he was involved in.

Urbanovich ultimately finished the day ninth in chips out of 56, taking through a stack of 5,495,000 to Day 2, where he would join all those he made it through from the other Day 1s. 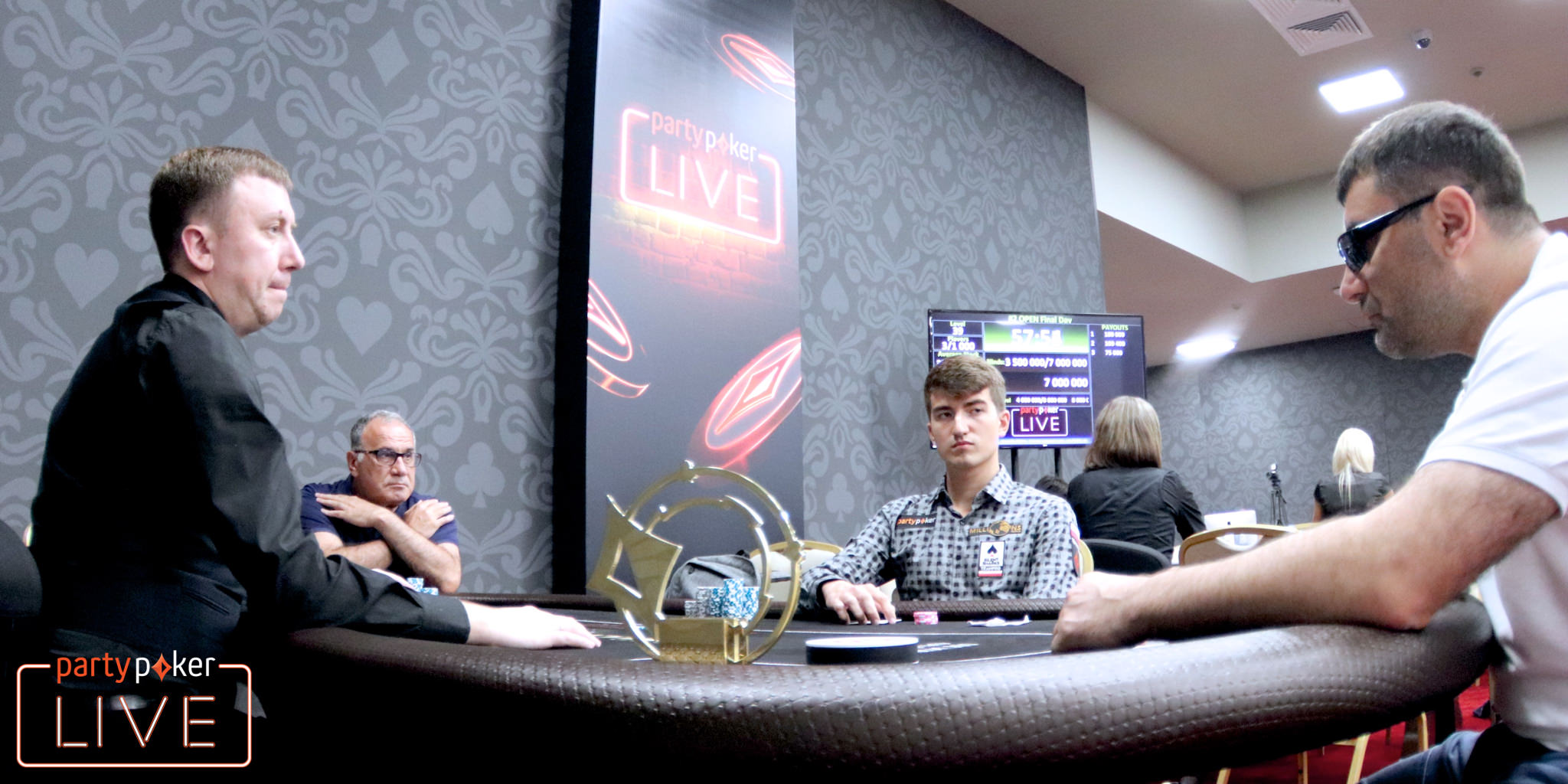 Urbanovich started strong on Day 3, as well, finding a necessary double-up early on. "I opened from early position, I had A-6. The big blind defended and, on the A-T-8 two diamonds flop, the big blind check-raised all-in with J-5 of diamonds." The partypoker pro managed to fade a diamond, and didn’t look back from there.

To end Day 3, Urbanovich opened pocket kings under the gun, calling Dmitry Belousov’s all-in and holding versus K-J. This left Urbanovich top of the pile of just 10 players, starting Day 4 with 169,100,000 in chips and ₽510,000 locked up.

With five players left, Dmitry Shutenko moved all-in from the under the gun with A-T, which Urbanovich called, taking his pocket fives to war. Urbanovich held on the 8-K-4-K-9 board, leaving just four players left.

The very next hand, Urbanovich raised with A-2, before reluctantly calling off Yevgeny Galakhov’s shove. Galakhov tabled A-7 and was in great shape to double through the partypoker pro. It already seemed like it was Dzmitry's day, though, so nobody was too surprised to see the board run out 2-K-10-K-9.

With that hand, Urbanovich had knocked two players out in just two hands! That gave him a resounding chiplead with just three players left.

Sedrak Baghdasaryan moved his last 14 big blinds in with 8-5 suited, with Urbanovich agreeing to give him a spin with A-4 suited. The partypoker pro not only held, but improved to a flush on the 3-4-Q-2-7 three spades board. That left just one player between Urbanovich and the trophy. It was his 300,000,000 chips versus Valerii Avanesian's 700,000,000.

Heads-up play lasted just six hands, with Urbanovich winning three out of the first five, but crucially failing to win the big one.

Urbanovich min-raised on the button, with Avanesyan making the call from the big blind. The flop came down 9-7-6 with two hearts, on which Avanesyan check-called Urbanovich’s half-pot continuation bet. Another 9 landed on the turn, pairing the board, with Avanesyan opting this time to check-raise shove over Urbanovich's bet. Urbanovich quickly called and the cards were on their backs.

Avanesyan had turned trips with K-9, but would need to find a pair-up as Urbanovich had flopped a straight with T-8. Agonisingly for the partypoker pro, the river double-paired the board, as another 7 landed, sending Urbanovich to the rail in second place.

The second-place score sees Urbanovich extend his lead at the top of the Poland All-Time Money List, as he clears $5,500,000 in live tournament earnings.

In and amongst the four-day melee, live reporter Sarah Herring caught up with Urbanovich to quiz him – about himself! Take a look in the video clip below.