The partypoker LIVE MILLIONS Russia at the beautiful Casino Sochi has been a huge success whichever way you slice it. The Main Event in particular has provided oodles of stunning poker drama, hundreds of individual stories of triumph or heartbreak, and, at the end of it all, a member of Team partypoker claiming the biggest title of his career in incredible fashion. Missed any of it? No worries. Here’s the epic story of the Main Event:

Day 1A of the MILLIONS Russia Main Event saw 201 entrants take to the felt, with 106 of them surviving. The ₽300M guaranteed event’s opening flight saw players such as Pavel Kovalenko, Vitaliy Li and last year's MILLIONS Russia third-place finisher Aleksandr Merzhvinskiy all in action along with former tennis star Yevgeny Kafelnikov. Ukrainian Oleksii Kravchuk finished on top with 5,055,000.

Maksim Pisarenko bagged the biggest chip count on Day 1B, which saw another 186 entrants get involved. A total of 94 players advanced, including Alexandr Labunskiy, Alimbay Sultanov, Jessica Pilkington and Dirk Bueker, who all took through healthy stacks. The 2017 partypoker LIVE MILLIONS champion Maria Lampropulos also progressed on her second bullet.

Day 1C brought in 270 entrants, with 148 of those bagging up chips at close of play. Hadi Khordbin came out on top with 5,930,000. partypoker ambassadors Ludovic Geilich, Dzmitry Urbanovich and Philipp Gruissem all tried their luck, with only Gruissem surviving. Niall Farrell fired two unsuccessful bullets after just missing out on the money in the Triton Poker Super High Roller, making it a frustrating day at the tables for the brilliant Scotsman. 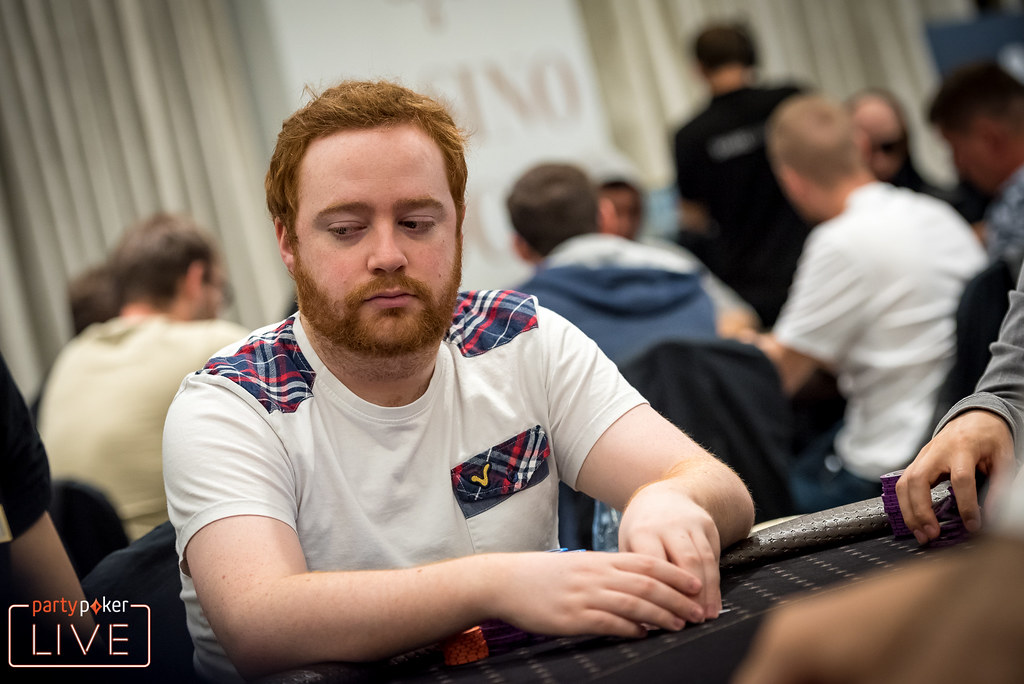 The re-entry and registration period was open for four levels on Day 2, and by the time the live satellite winners, successful online Day 1 players, and hopefuls wanting one last shot at the gargantuan guarantee had joined the 367 advancers from the Live Day 1s, the total number of entries had climbed to 916. After eight more intense levels, 200 progressed to Day 3, with Aleksandr Denisov in the lead with 19,035,000. Denisov took out Josef Snejberg and Nikolay Dementiev in two big pots late on to cement his place at the top.

Second in chips was Aleksei Istomin, with Oleg Netaliev in third. Defending champion Aleksandr Gofman and Niall Farrell both advanced on the feature table, but Ludovic Geilich was ousted late on. Fellow partypoker ambassadors Bertrand "ElkY" Grospellier and Open runner-up Dzmitry Urbanovich were also eliminated on Day 2, but their teammates Anatoly Filatov (remember the name!) and Philipp Gruissem progressed. 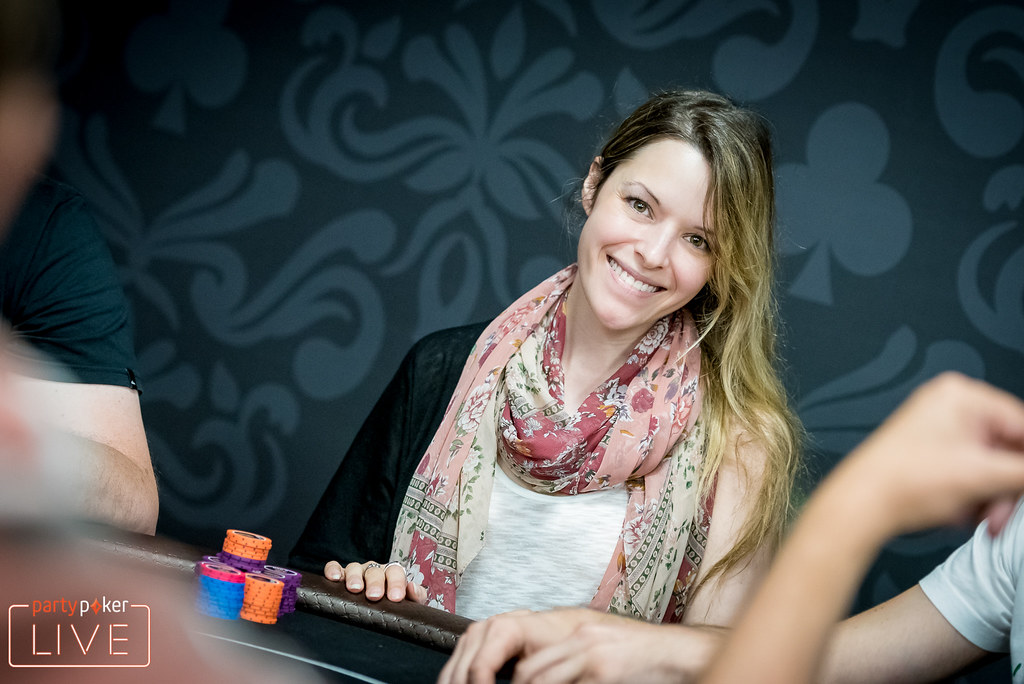 Two hundred players sat down at the start of Day 3, with just 58 of them surviving. Gor Kazaryan finished on top with 45,250,000, with Luke Thursfield, Maxim Panyak, Konstantin Uspenskii and Viacheslav Zhukov joining him at the top of the counts. Team partypoker Russian ambassador Anatoly Filatov also started to make his move on Day 3, finishing with 30,000,000 after an impressive day in his home MILLIONS event. Niall Farrell, Vladimir Troyanovskiy and Timothy Adams also progressed.

When the day began, the remaining field’s first aim was to make the top 119 places and seal a spot in the money. However, there were several high profile exits in the early levels including Day 1C chip leader Dmitry Yurasov, the U.K.'s Jack Sinclair and former partypoker MILLIONS champion Maria Lampropulos. 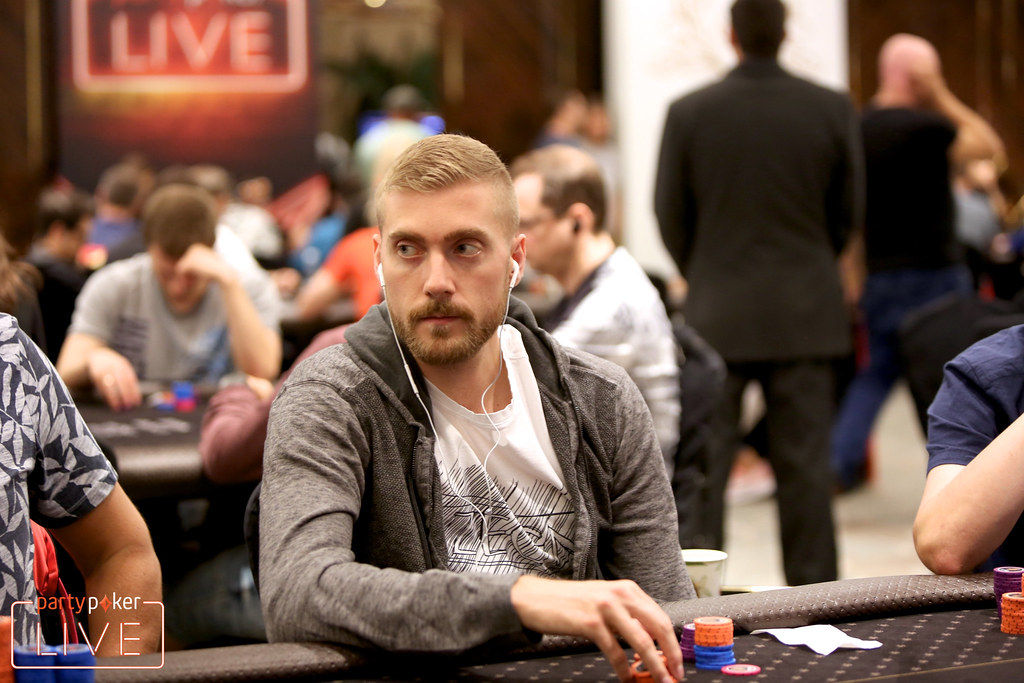 Defending MILLIONS Russia Main Event champion Aleksandr Gofman saw his dream of back-to-back titles extinguished when his pocket kings lost an all-in to ace-queen. Dirk Bueker, the online qualifier turned Golden Chip winner, was unable to turn his free entry in the Main Event into a profit after he ran pocket queens into pocket kings to exit before the money bubble had burst.

Igor Yaroshevskyy, Koray Aldemir and Manig Loeser departed in hand-for-hand play, before Konstantin Puchkov busted on the stone cold bubble when his ace-king all-in was called and lost to Oleksii Kravchuk’s pocket queens. Among the flurry of eliminated players sent to the payout desk after the bubble had burst were Team partypoker ambassador Philipp Gruissem, Jessica Pilkington, and Day 1C chip leader Hadi Khordbin. 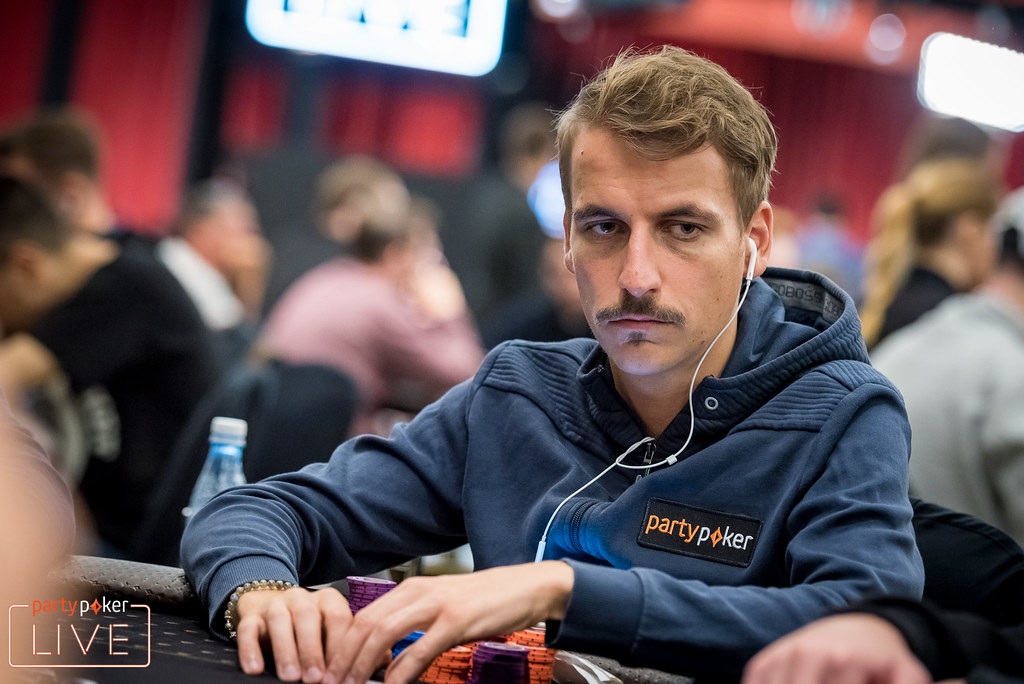 The Main Event took a big step closer to determining a champion on Day 4, with the 58 players who started the day whittled down to just eleven hopefuls. Leading the field at close of play on Day 4 was local Andrey Malyshev, who bagged up 140.3 million. In the last level of the night, Malyshev knocked out 2017 finalist Vadim Lipovka with king-eight versus ace-queen suited in a battle of the blinds, and won a big flip with ace-king against the pocket jacks of Luke Thursfield soon after to take the chip lead. 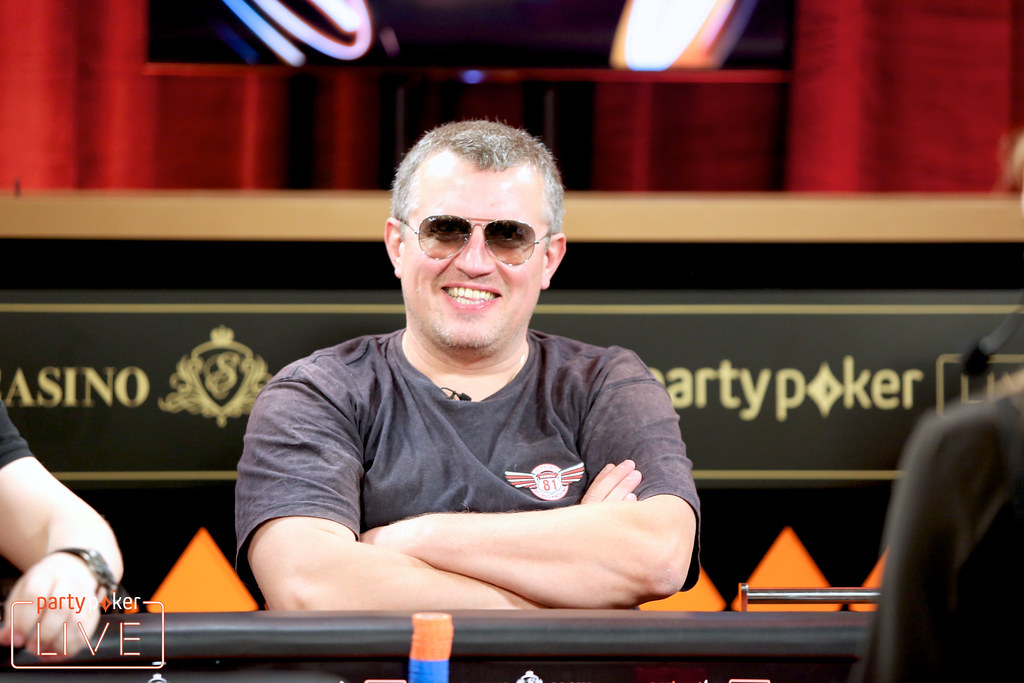 There were several big stories early on Day 4, with seven of the 58 hopefuls battling for an additional $100,000 prize in the MPPL Dollar Last Longer competition. Eventually, the UK's Colin McTaggart and Russia's Vyacheslav Nikulin were the last two standing, with both possessing short stacks. Nikulin scored a lucky double with sixes against kings to survive, while the unlucky McTaggart bowed out in 36th with ace-eight against sevens.

By then, notables Vladimir Troyanovskiy, Mikhail Surin, Andrey Kotelnikov, Oleksii Kravchuk, Timothy Adams and Aleksei Istomin were all on the rail. Ukraine's Artem Metalidi, who finished in eighth at the 2018 WSOP Main Event for $1,250,000, had to settle for 27th. Further casualties towards the end of the day included Israel's Saar Wilf and two-time WSOP bracelet winner Viacheslav Zhukov.

With two tables remaining, Triple Crown winner Niall Farrell was on track to claim yet another major live tournament title, but his deep run ended in 14th. Meanwhile, Vadim Lipovka, who finished 8th in the 2017 MILLIONS Russia Main Event, was unable to make it back-to-back final tables, with his bid falling just short as he was eliminated in 13th by eventual chip-leader Malyshev. It was also Malyshev that took most of Luke Thursfield's chips in a big flip with ace-king versus jacks, before Thursfield was eliminated with trip fours against Chin Wei Lim’s flush. 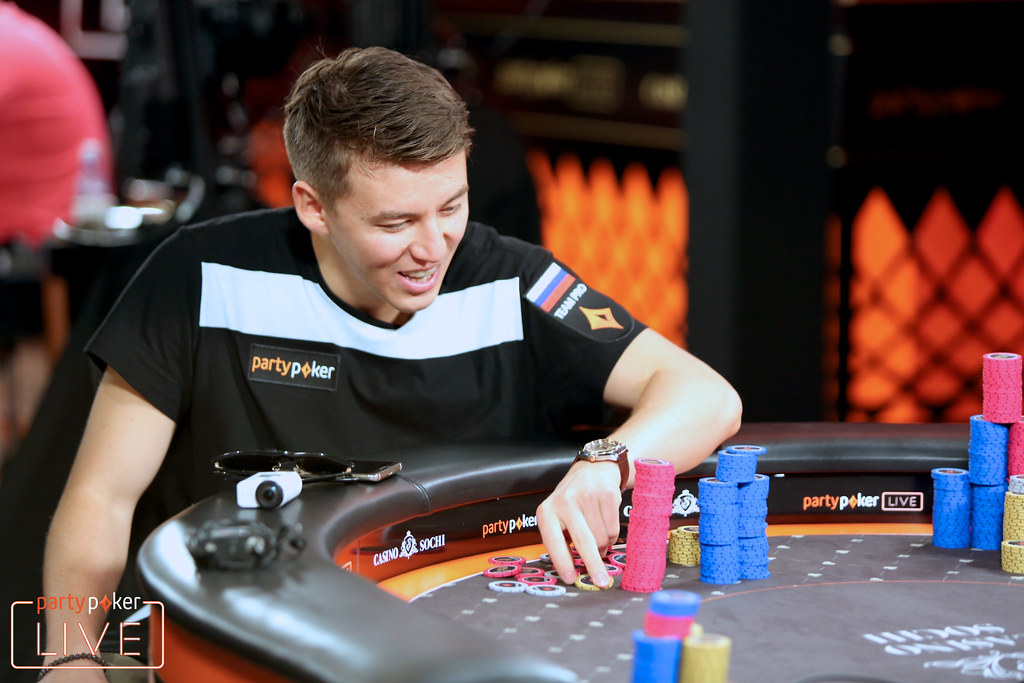 Only 11 players from the 916-strong field returned for the final day of the 2018 partypoker LIVE MILLIONS Russia Main Event and ultimately it was Team partypoker ambassador Anatoly Filatov who would outlast the lot. Filatov defeated countryman Gor Kazaryan on home soil and scored his best result on the live circuit to date for ₽60M (approx. $887,000).

"I’m very tired, very exhausted, I don't realize yet that I won this tournament, especially in my home country," an overwhelmed Filatov said. "On the eighth of August it was my birthday, 30 years old, such a good beginning for this year. I am very glad."

Filatov already had more than $2.1M in cashes to his name, including several victories in partypoker LIVE events. He was close to another trophy at the 2017 Caribbean Poker Party, finishing second in the $5,300 Finale for $165,000, before adding 11th in the partypoker MILLIONS Grand Final Barcelona €10,300 High Roller (€50,000) and seventh in the partypoker MILLIONS North America C$10,300 Finale (C$60,000), but this topped the lot. 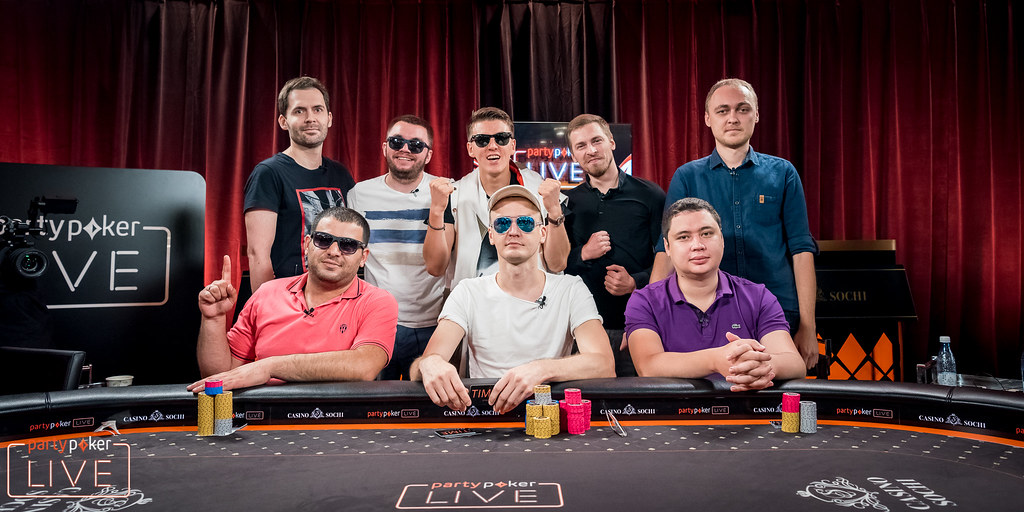 Filatov recently talked to James Dempsey about exactly how much a victory in this event would mean to him in the partypoker podcast, and his dream came true on Day 5. It wasn't an easy ride, however, as he faced some tough competition in Konstantin Uspenskii, Gleb Tremzin, Viktor Khodorenko and eventual runner-up Kazaryan. It only took half an hour to determine the unofficial final table of nine from the 11 contenders, with Ekaterina Fedyaeva and Aleksandr Chernikov both being eliminated by Khodorenko.

The final nine included seven Russians, one Belarusian and Malaysia's Chin Wei Lim, and the Malaysian was first out. Having paid off Khodorenko's full house just prior, Lim four-bet all in with pocket fours and Khodorenko took the flip with ace-jack to spike a jack on the turn and score his third knockout in a row.

With eight left, Filatov started to make his move. He spiked a queen to eliminate Uspenskii in 8th with king-queen against the short-stacked player’s ace-king. Next on Filatov’s hit-list was Mikhail Galitskiy, who entered the day as one of the bigger stacks but never got much going. Filatov snap-called his all-in with kings against ace-queen to send another opponent to the rail.

Accomplished poker pro Tremzin had skilfully moved up the pay ladder with his short stack, but his run came to an end in sixth with pocket fours when Malyshev called his shove with pocket tens and Khodorenko did with eights. Malyshev tripled up. Alexey Melnikov was next to fall, going out in 5th after losing a succession of pots, before getting in his last 12.5 big blinds with ace-six. Filatov called with king-jack suited and got there on the river. 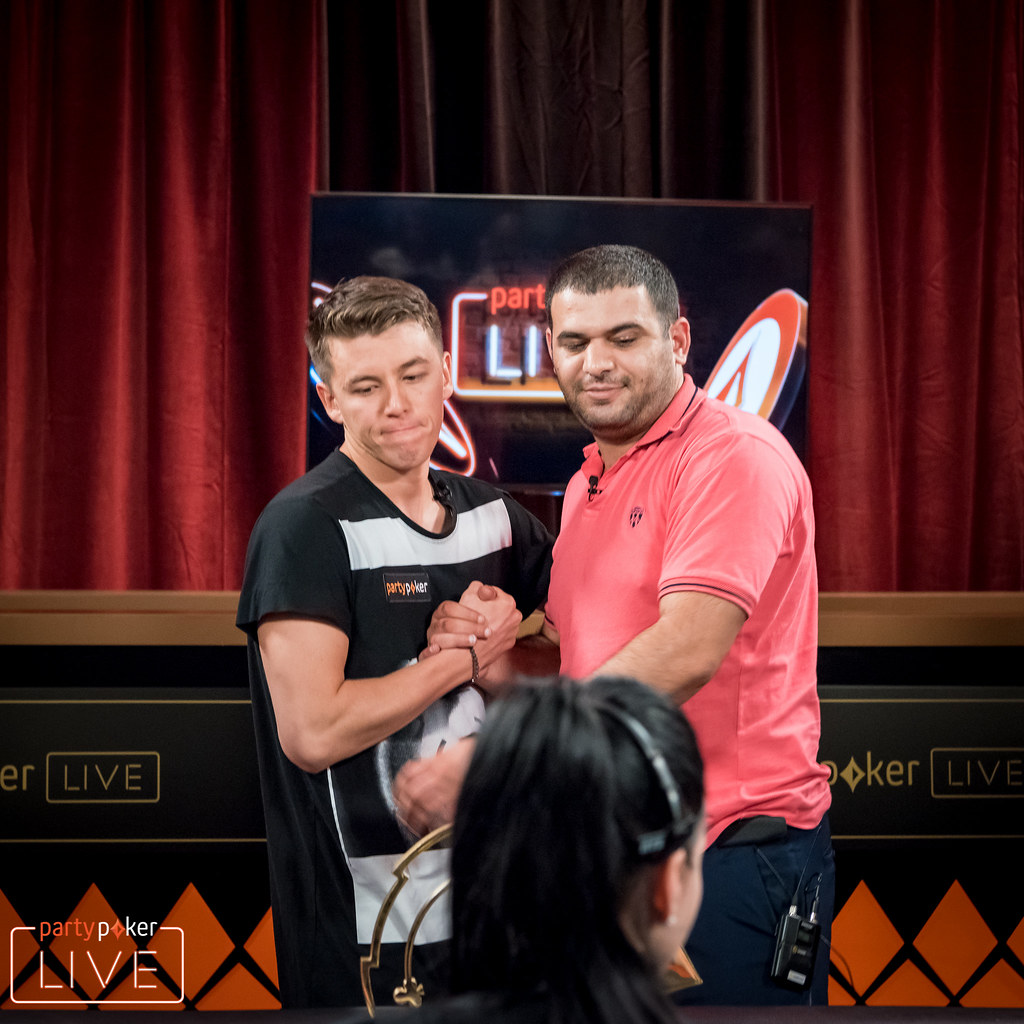 Khodorenko had been the dominant chip leader for much of the day but some of his riskier moves backfired and he had to settle for fourth. The Belarusian three-bet all in with ace-seven and again it was Filatov who dealt the fatal blow after four-bet jamming with pocket queens in the big blind. A queen on the turn left Khodorenko drawing dead and Filatov took the tournament lead for the first time.

With three remaining, Malyshev pulled into the lead, but one crucial hand proved decisive. Kazaryan three-bet with queen-jack suited and Malyshev four-bet all in with ace-king to see Kazaryan call it off and flop a jack for the biggest pot of the tournament to date. Malyshev never recovered from that and, despite doubling up, fell in third place with king-seven against the king-eight of Filatov.

Heads-up play lasted for more than 80 minutes and the lead changed hands several times without any huge pots. A cooler then determined the champion when Kazaryan flopped top two pair with queen-nine and Filatov turned the nut straight with jack-ten of hearts. All the chips went into the middle and a blank ace let Filatov and his friends on the rail celebrate a glorious victory. 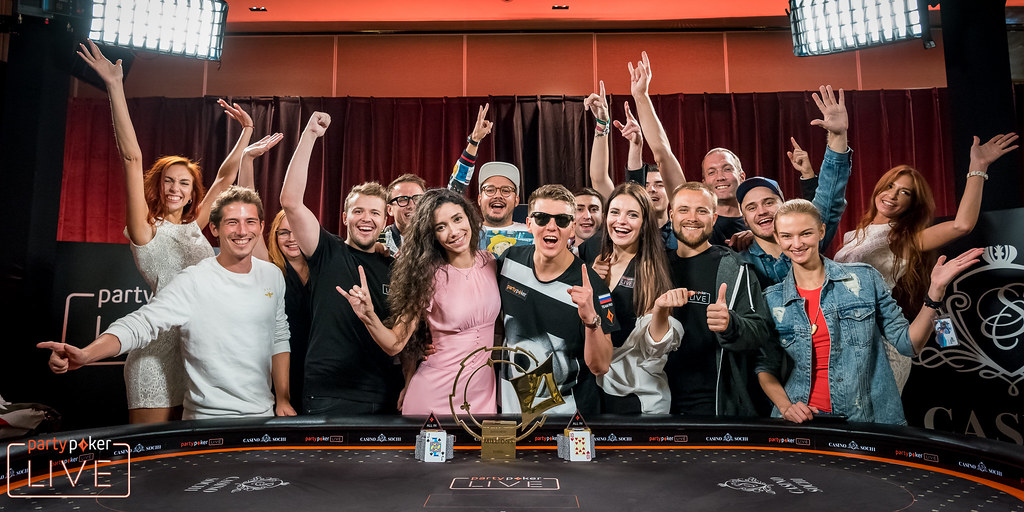