Meet Mathijs Jonkers. This summer, the Dutchman has been living his dream of playing in the World Series of Poker Main Event for the very first time – and sharing the entire experience with you. Get ready for elation, heartbreak, excitement, parties and maybe, just maybe, a deep run in the biggest tournament of them all in the final part of his WSOP Diary! 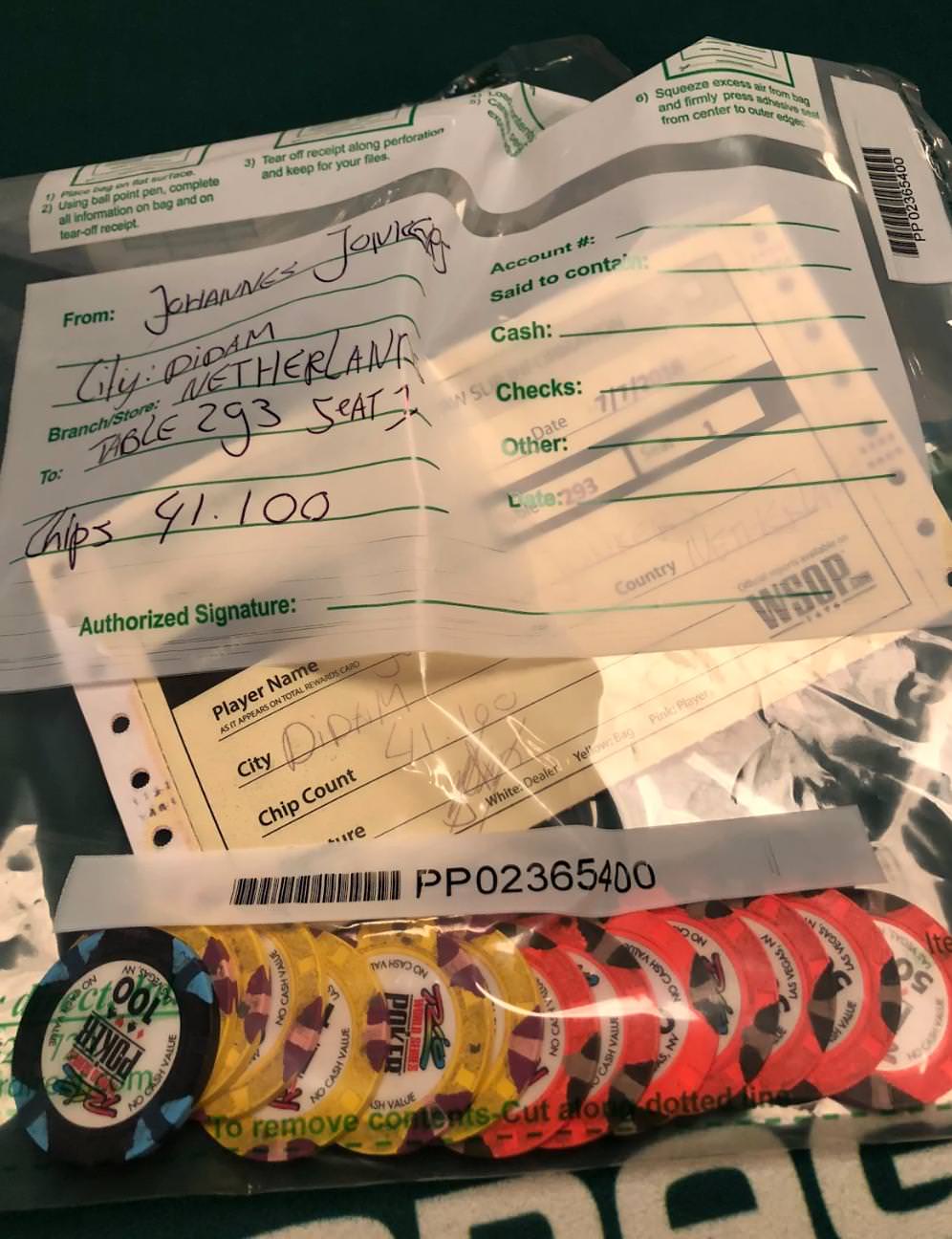 Bagging any chips is a great feeling, especially after saving your tournament life

My name is Mathijs Jonkers and I am writing a poker diary about my first World Series of Poker Main Event. In the previous diary entries,  I wrote about my travel to Las Vegas and preparations before the WSOP and my Day 1C which ended very well.

As you have read, my Day 2 would start at with blinds 300/600 and my stack of 91,900. I started with over 150 big blinds which was a very comfortable stack. My table wasn’t very tough except for two players. One of them was Jack Sinclair, a friend of me who final tabled the WSOP Main last year.

The day started pretty well for me. I planned to play tight and aggressive and to open a bit wider in late position, but I had to keep notice of Jack who is capable of three-betting a lot and put me in tough spots. In the first two orbits, I won most pots. I open

in late position and the female player in the small blind called. The flop came

she checked and I bet 6,000 and she open-folded

which gave me a nice pot to start.

A bit later, I'd opened a couple of hands and Jack Sinclair had played back at me a bit. I found pocket kings in the cut-off and opened to 1,500. Jack three-bet me to 4,200. I knew that he might do this with a wider range, but he probably knows that I know, so I decided to four-bet to 12,000 (which I thought was a bit too big afterwards). I didn’t give Jack the spot to jam light anymore.  Jack folded and he said: This four-bet was way too big. I didn’t agree with him at that moment, but later I thought: “Yup, he was right.”

to 1,500 and Jack called in position. The flop came

and I checked to Jack again. Jack checked back. On the river a

came which was a blank and I decided to check. Jack made a 3,000 bet and I called. Jack shows

rainbow and I checked. He made a continuation bet of 9,000  and I called. The turn came a

for the straight. In-game, I thought he would maybe make a bluff of his QQ, KK and AA, but that was wrong because he almost never bets the turn with these hands.

Right after that hand I became card dead. And it is never a good moment to become card dead. After three hours of folding my 38,000 stack was down to an 18,000 stack which was 15 big blinds. But than I doubled up for my tournament life the second time in this tournament. A loose player limped in and three other players called. I found

in the blinds and shoved all in. The first limper folded (which is always nice), the second limper folded, the third as well, but the last limper makes the call with 66. So a traditional flip for me. With a flop of

After the tournament finished, I returned back to the MGM Grand and went to bed early. The rest of the WSOP will be very, very tough whenever I can manage it to stay in the game. So sleep is very important and my jetlag was not over yet. 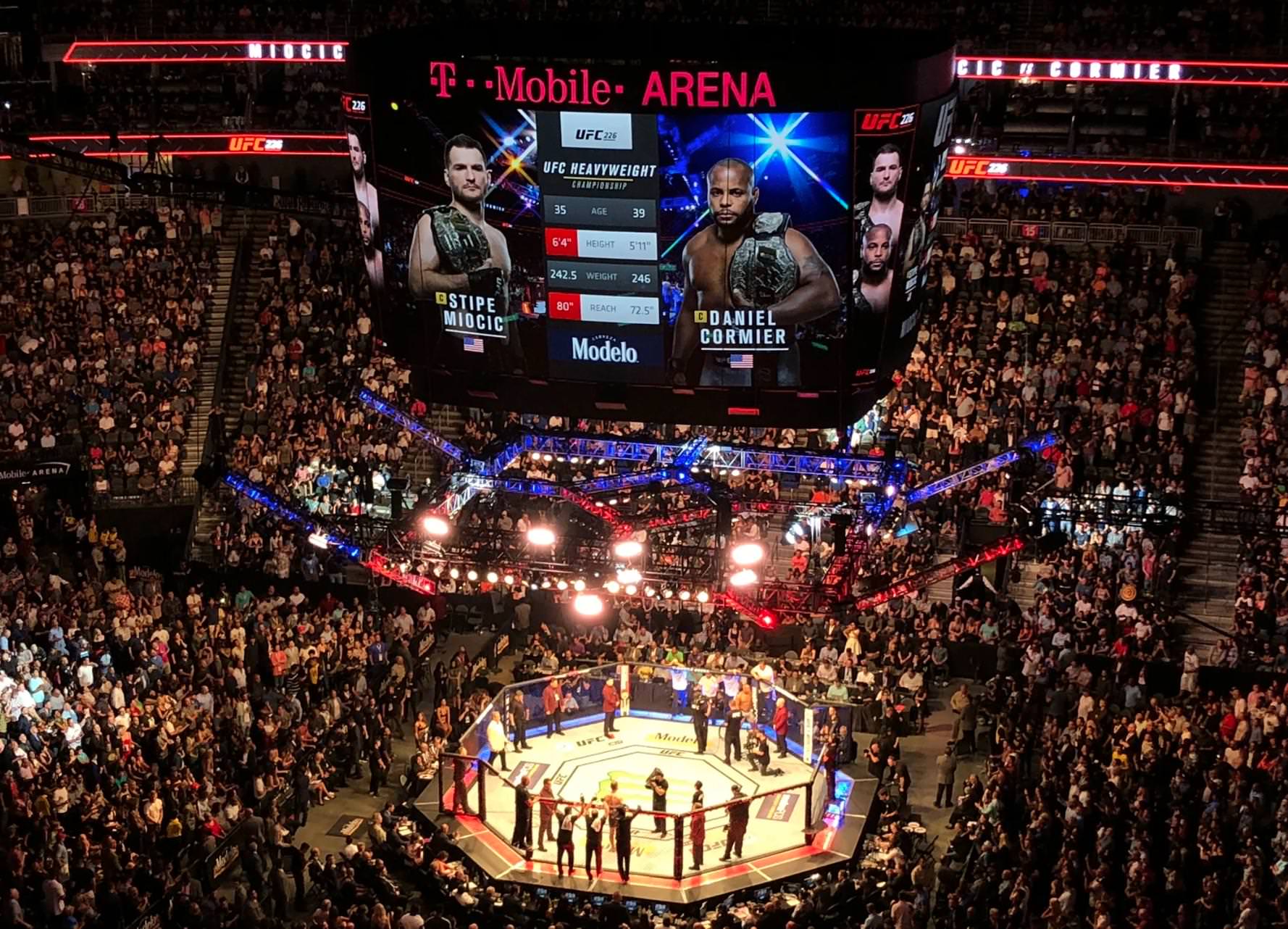 No time for this after Day 2, as I was in a fierce battle myself. But on Day 2 I witnessed live UFC!

Today was Day 3 of the World Series of Poker and I woke still in it to win it! Yesterday I spoke with my girlfriend as well and she decided to come over to Las Vegas. She could book a flight on Monday, but that would cost her about €1,500 and a flight on Friday would cost her €900, so she flew to Las Vegas right away.

After seeing the table draw, I noticed that I was seated at an six-handed table. This couldn’t be correct and after speaking with some friends they told me, they would probably break my table before the start of the tournament or seat new players at my table before the start. I went to the Rio early, because there was no way I wanted to arrive too late with a stack of 20 big blinds. I arrived 30 minutes before the start and took a chair massage because I didn’t know what to do else. 10 minutes before the start, I walked to my chair and heard that they would reseat me right away. So I took my stack and went to my new table. Because there were still 10 minutes to go I had the chance to scout my table and search for every player on the Hendon Mob website. After doing my homework, I noticed that all the players at my table had over $100,000 live winnings. So at least all the players were experienced. When I looked at the players' faces I thought they were all decent as well.

The first two hands at the table saw fireworks right away!  One guy was busted with QQ vs AA preflop all in and in the other hand, AK won against JJ and a player busted.  In the first hour, I got some shove spots and they all folded. One time my stack was big enough again to steal. But the player right on my left three-bet and I had to fold.  But then came an "all-in and call" situation.

The player in Seat 9 was a bigger stack and looked pretty active in the first hour. With my reshove stack of 20 big blinds, I decided to shove a little bit lighter against his opens. And two hands later he opens… I find 33 on the button and I decide to shove my last 20 big blinds… The small blind folded and the big blind asked for a count. The dealer was on 50% of my stack with counting and the player decided to call. The initial raiser snap folded and in one second I saw I was in bad shape… my opponent had JJ. So a typical 20/80 situation. NOT GOOOODDDD!

Then the flop came

...no help came. I busted I guess around the 2,500th place out of 7,874 players.  As I see it now, I am happy with my play during the first two days. I am not happy with my call in the most important hand of Day 2, but that happens. I outlasted over 5,000 players in my first ever WSOP Main Event in Las Vegas and hopefully the next time I will make it into the money places. I am disappointed that I busted before my girlfriend arrived in Las Vegas. But it would be a mistake to think about that during a hand. You have to play your hands as best as possible.

The rest of the trip…

My trip to Las Vegas was not over yet. It was Friday and the next Thursday I would leave. So a short holiday remained for me. I played some cash games and a daily $400 tournament at the Aria. I showed my girlfriend the strip of Las Vegas. It was her first time in Vegas and she was very impressed! We rented a car on the last day, went to the Hoover Dam, lake mead and the last night I played the whole night cash game at the Bellagio. I enjoyed my first ever WSOP Main Event in Las Vegas a lot and I want to thank you guys for following me. Just send me a message on Twitter if you have any questions about Vegas or my trip! 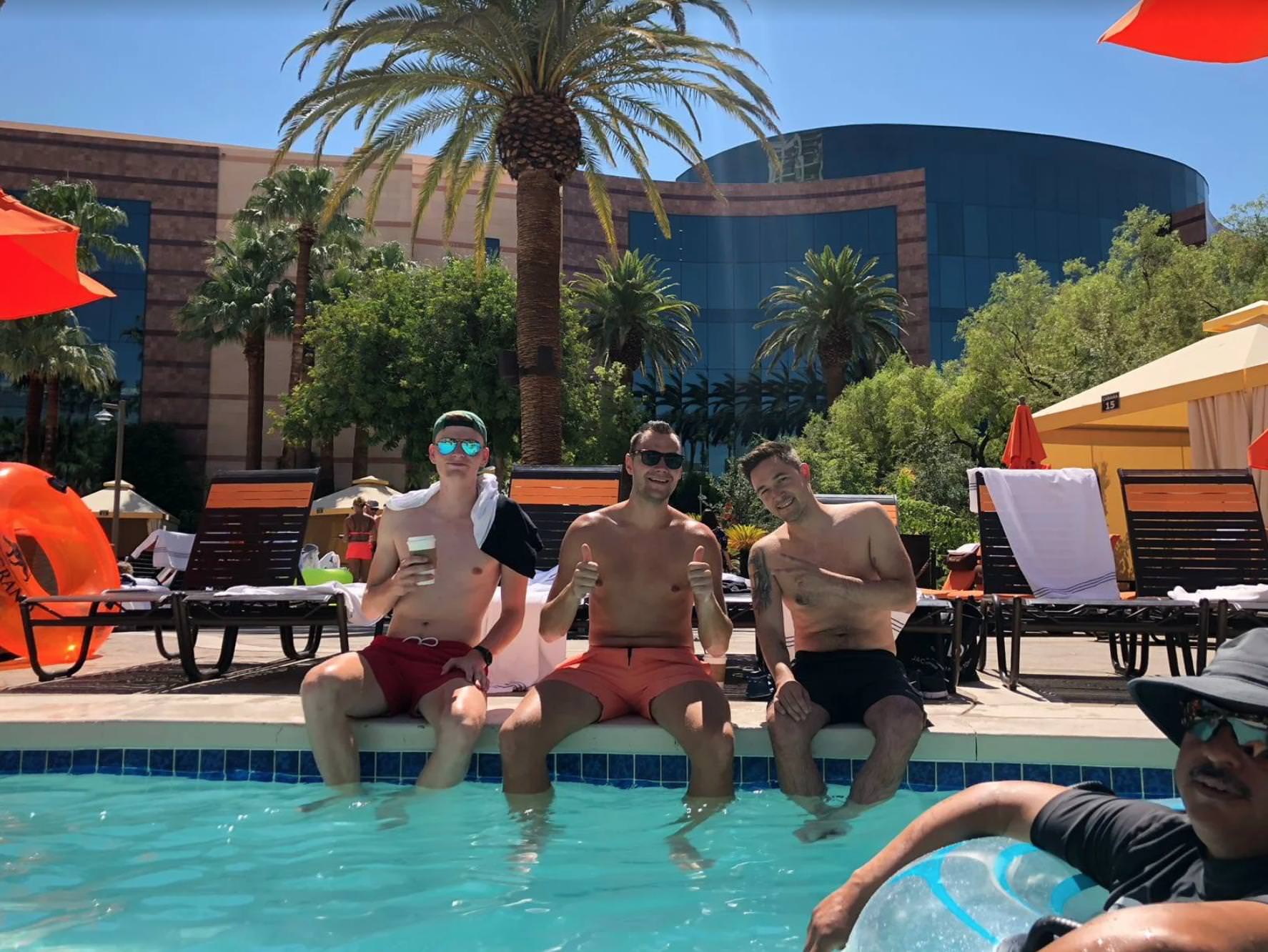