With the Caribbean Poker Party just around the corner, we take another step back through the mists of time and rewind to the 2017 edition of the CPP, revisiting the $10,300 buy-in High Roller.

The first event of the 2017 Caribbean Poker Party has come to an end and it was Preben Stokkan coming out on top of the $10,300 MILLIONS High Roller. Stokkan earned himself a cool $275,000 at partypoker's last stop of the season in Punta Cana, defeating Jonathan Little in heads-up play. Little will still take home $175,000 for his efforts today.

In the last hand of the night, Stokkan shoved all in on the button with ace-five and Little called off his last 33.3 million with pcoket threes. The board ran out an eventful K-4-2-7-3 and while the three on the river gave Little a set, it also gave Stokkan a straight to conclude the evening's festivities. 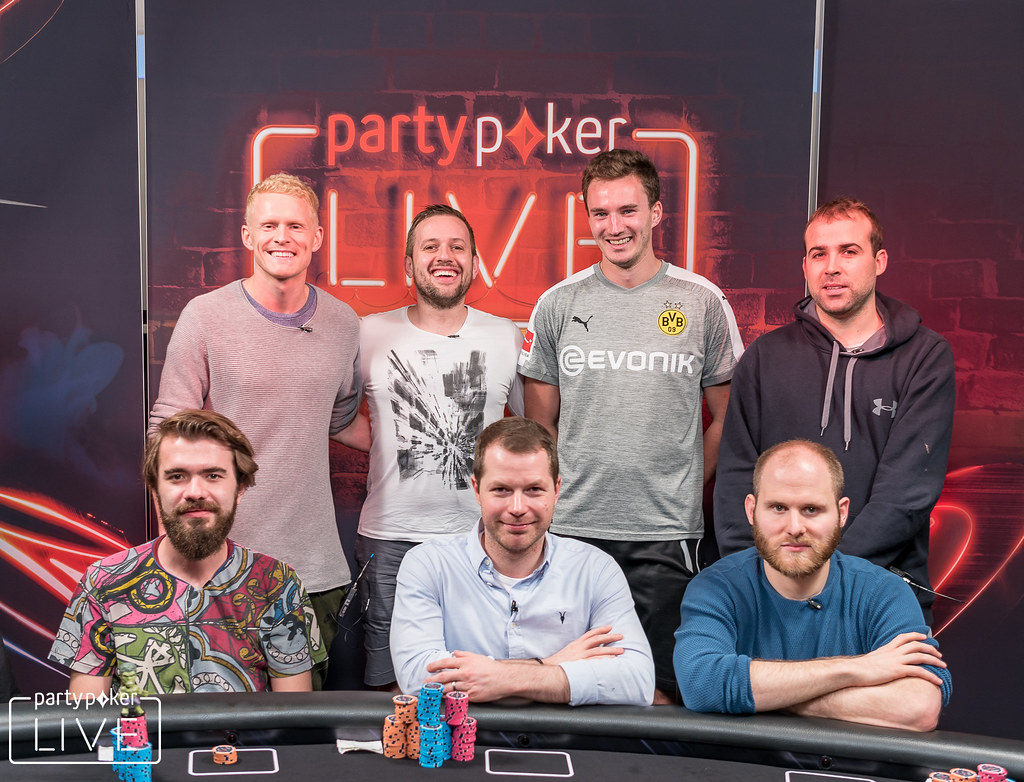 Stokkan is mostly known for his heads-up play online but has slowly transferred to the live tournament game. Stokkan has a little over $500,000 in live tournament earnings with his biggest cash coming in 2016 on his home soil. He definitely took advantage of being more on the tighter side when the final table was reached, picking certain spots to put his chips in the middle. Stokkan did run a big bluff against Little in heads-up play to solidify his chip lead before finally closing things out in the wee hours of the night.

This tournament attracted a total of 103 entries, with late registration staying open until midway through Day 2. With a guaranteed prizepool of $1,000,000, many of the big names in the poker world made their way to the Melia Caribe Tropical resort. The guarantee was covered and a total of 11 places were paid, with the min-cash being worth $20,000. 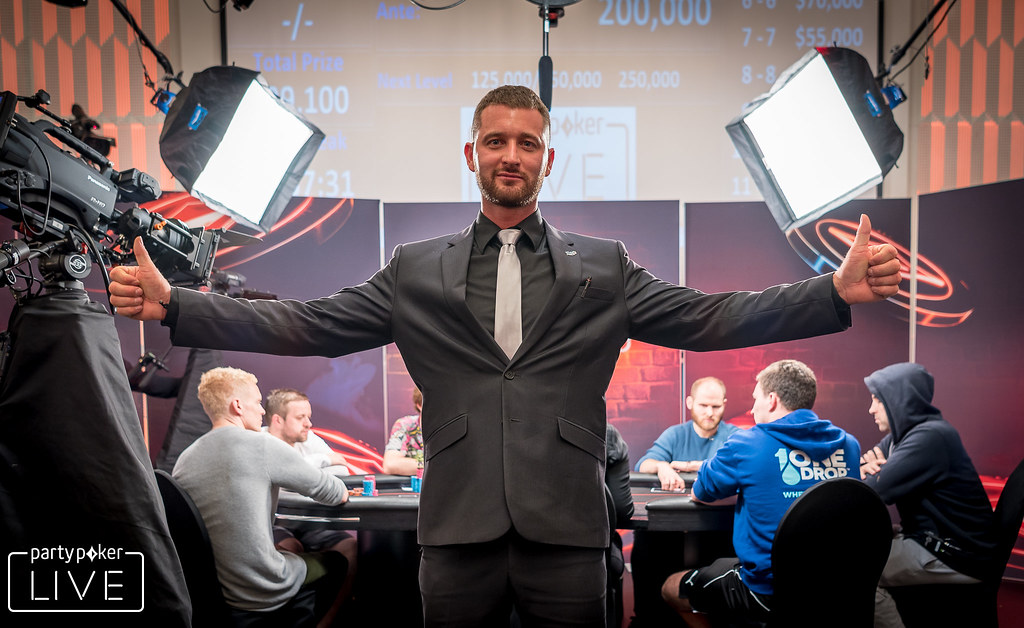 The money bubble lasted over two hours with the clock being paused for well over an hour at level 19. The clock finally resumed after Manig Loeser called off his last 700,000 chips with ace-six. He was up against the nine-seven of clubs of Sam Greenwood but was drawing slim when Greenwood flopped a straight. Loeser became the bubble boy and play continued on. Sergio Aido (11th place - $20,000) and Stefan Schillhabel (10th place - $25,000) finished in the money but just shy of the final table.

The final table began with a couple of short stacks after the money bubble burst just prior to it starting. In the first couple of hands, Little scored a double knockout of Felipe Ramos (9th place - $30,000) and Sean Winter (8th place - $40,000). That left Steffen Sontheimer (7th place - $55,000) on the short stack who has had an incredible 2017. Sontheimer recently took down the inaugural Poker Masters this summer along with the coveted Purple Jacket. He was facing three limpers from the big blind and pushed all in with king-queen but ran into Greenwood's pocket aces.

Pascal Lefrancois (6th place - $70,000) was one of two Canadians remaining in the field. He wasn't able to get much going at the final table and eventually got all of his chips in the middle with pocket fives. Greenwood scored another knockout when he paired his ace on the river. That left five players remaining and they battled and tossed chips around for quite some time. In what was a cooler hand, Kenny Hallaert (5th place - $85,000) called off his remaining chips with a queen-high straight but Little had rivered a king-high straight. 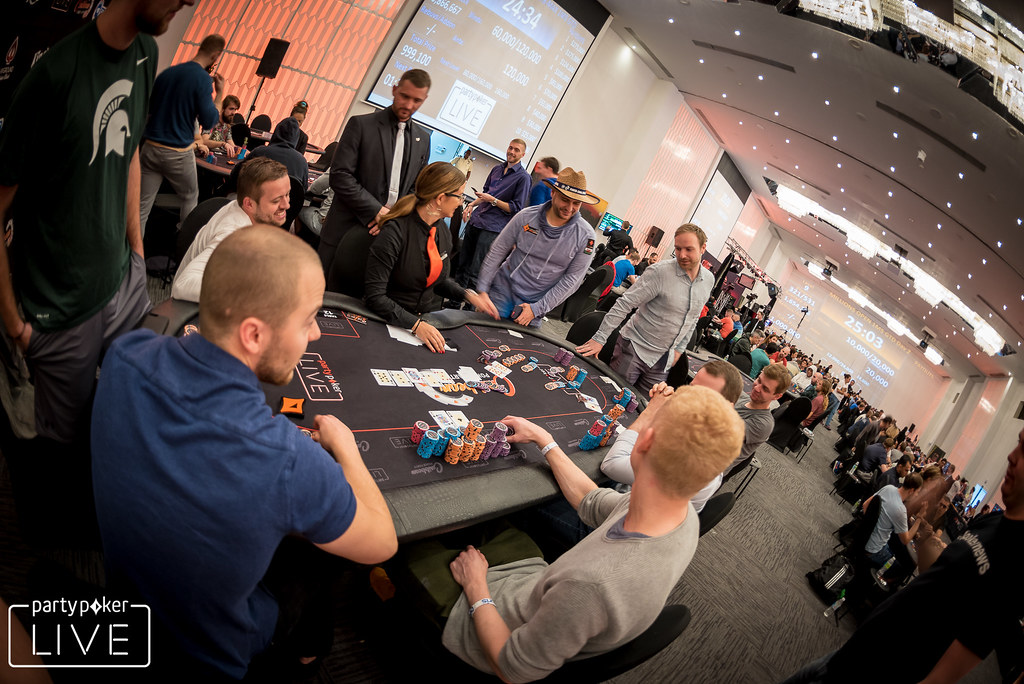 With four players left to battle, Little and Greenwood pulled themselves ahead of their two opponents. Alexandru Papazian (4th place - $100,000) pushed all in with ace-eight  and was called by Greenwood's dominating ace-nine. Although Papazian flopped an eight, Greenwood flopped a flush and Papazian became the fourth-place finisher. Sam Greenwood (3rd place - $124,100) took a commanding lead into three-handed play but after doubling up Stokkan and Little, he found himself on the short stack. He wound up all in with a straight and flush draw against Stokkan's overpair. He was unable to hit any of his outs and was sent to the rail. That left Stokkan and Little to battle it out heads-up with fairly even chip stacks.

There were many players that fell by the wayside multiple times including Steve O'Dwyer who entered a total of six times. Bryn Kenney was not far behind, entering four times, and neither player found any luck in running up a stack throughout the registration period. Other notables to bow out early included Ryan Riess, Philipp Gruissem, Adrian Mateos and some of partypoker's finest, Mike Sexton, Kristen Bicknell, Sam Trickett, and Roberto Romanello.